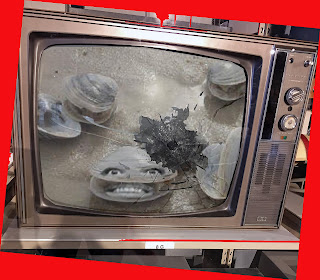 Okay, I've ventured into YouTube in a futile effort to validate my self-perceived creative talents and once again I have confirmed that my middle aged invisibility in the real world has infected my social media self as well.

Granted I've only posted two home made videos to my YouTube channel, but only one has been viewed and I suspect that was by me. And after viewing YouTube's tutorials on how to be discovered on YouTube, I am even more frustrated. Because their algorithm only displays your videos to more people based on the number of likes and subscriptions. This seems to me to be kind of a catch-22. Because if no one sees my videos, how can they like them or subscribe?

I am at a loss for assigning compelling key search words to my videos, too. But if someone does a search about clams, unread blogs, or middle aged humorist, I think I have that niche covered.

Turning my blog posts into videos is hard work. I am going to experiment with audio narration to see if that helps. Because I've found using iMovie titles for the narrative is tedious and not real compelling.

I've just had a flash of  Deja Vu that I've written this post before about making and narrating videos.


Anyway, I continue to look at other YouTube content. James Veitch and Ze Frank have the advantage of production assistance. Though I did run into a YouTube channel of this guy in Virginia who just puts his phone on a selfie stick and videos himself rambling on while he sits in a lawn chair out in the middle of his field in the country. Near as I figure, his niche is army vets who have left the grid and moved into the country (though I'm not sure having a smart phone and a YouTube channel constitutes being "off the grid.")  The video I watched was a long, rambling narrative about the man scaring off an annoying neighbor by posting a crayon scrawled sign on his property stating he was filming his neighbor trespassing via CCTV.  He didn't really have any cameras set up. It took him 20 minutes to get to the punch line of the story.

The video had more than two million views and the man had 36,000 subscribers.

Tell me there is a god.

Okay, I'm still getting the hang of cobbling together a video with my iPad, still images that I've Photoshopped and scripts converted from blog posts. But explain how a rambling YouTube video of a man sitting in a field digressing for 20 minutes about the terrible things he's seen while overseas in the Army while he meanders his way to the conclusion of the story he started telling deserves two million views.

Even James Veitch only gets about a half million views of most of his posts. Though I have to say, funny as his original posts were about responding to Nigerian spammers, they get old after watching five or six videos about them.  You have to mix things up a bit or things get stale.

Listen to me giving advice about things getting stale. I can't even get people to read my blog long enough for it to become stale. Hell, my topics are so random people are probably craving some continuity.

In the meantime, I'll continue to dabble in YouTube and the Medium (another place I post my "stories" for no one to read). Who knows, maybe I'll try sitting in my backyard with a selfie stick complaining about my neighbors while I digress about random things and see how that does.

Lord knows I'm good at digressing.
Posted by Time at 9:15 AM