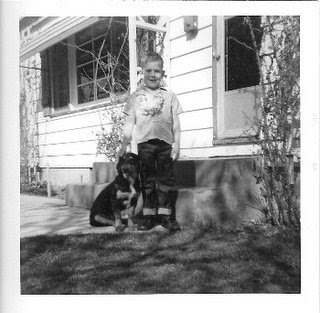 
I contacted my sister via an e-mail address she had associated with her post about finding her birth mother and said I'd love to have contact with her. She responded. We e-mailed and talked on the phone. She still lived in Idaho. She also talked with my brother. Eventually she suggested going to Boise to meet him. I agreed to fly there to meet her as well.

So last Friday I flew to Boise, rented a pick up truck (it was that or a mini-van), checked into a hotel and then drove to my brother's house to meet my sister for the first time.

Okay, my sister had e-mailed me a few photos of her before we met. She bore a strong resemblance to my mother.  She walked in the door at my brother's and I was struck how much she resembled my mother. We hugged and than sat down at my brother's kitchen table and awkwardly made small talk. She introduced us to her husband.

I gave her a package I'd brought for her that contained a framed photo of my mother at aged 25 just before she married my father. As she opened it and stared at it awkwardly, I wondered if it had been the right thing to give it to her. She sat is aside and slowly folded the wrapping paper it had come in. It reminded me of the way my grandmother and mother used to open and dismiss gifts.

Finally we decided to go out to dinner. I squeezed into the back seat of my sister-in-law's car with my sister and her husband. It wasn't really big enough for three people. I could tell my sister's husband wasn't please to be wedged in with me. My brother had chosen a Cracker Barrel restaurant. We were all seated and quickly ordered.

I can't really recall what we talked about at dinner. I think it was about my sister's family. She had married at aged 19, had nine children. She divorced and remarried to her current husband. He had five children.  All of the children were grown. There were 65 grandchildren. My sister confessed that having grown up without siblings or uncles or aunts, she had craved family and made up for it on her own.

We finished dinner and agreed to meet at my brother's the next morning to share family photos. I returned to my hotel and tried to make sense of it all.

The next morning I arrived and my sister and her husband were already there. They were trying to open up a thumb drive with her family photos on it. My brother had his computer hooked up to his big screen television. It was in a cramped family room crammed with Boise State Bronco collectibles. It was a dark and depressing room.

We finished looking at her photos and I had my brother bring up my Flickr account that had my family tree photos. My photos weren't as organized or as nice as my sister's photos. I had captured most of the photos of my mom's family from old photo albums. Many of the photos were in poor condition.

I began to get irritated as my brother (who controlled his computer) flipped through my photos, sometimes skipping over ones I wanted to talk about. Or spending too much time on trivial photos. But that is just the nature of my relationship with my brother.

At one point I was telling the story of how I go my first dog Shep. The neighbor across the street had been out hunting and found two puppies abandoned in a hole in a field. He brought them home. I went across the street to play with the puppies and convinced my parents to let me have one. I remember carrying Shep across the street to our home. He was just a puppy, but I was only five and he was almost as big as me. At this point Dan said, no, we had found the dogs while we were out pheasant hunting. I said he would have only been nine and wouldn't be out hunting.

This has happened at other times when I've visited with him. He has begun recalling our childhood differently than it happened. At at times he has taken over my events as if they are his own.

Anyway we finished looking at the photos and decided to all go out for lunch. We ended up at the Black Bear Restaurant, another country type restaurant. My sister and her husband treated us for lunch.

Then my sister and her husband needed to leave to return to their home a few hours away. Before they drove off we did drive around Boise trying to find the neighborhood where my mother grew up and the area where my great grandmother had a farm. We weren't overly successful. We did also drive by where I grew up. The house has been replaced by three townhouses.

It was an emotional weekend. I have written some with my sister since and she was happy to get to meet us and wants to stay in touch. I do too.

But returning to Boise and reliving so much of the past was hard. Growing up there wasn't easy. I am happy to have discovered I have a sister. I am, however, still dealing with the fact that my mother kept that a secret, especially after she reconnected with her daughter so many years later.

On the bright side, my family tree has grown quite a few new branches.
Posted by Time at 10:30 AM

Sorry anonymous. But I haven't moderated my comments for some time so hopefully it hasn't been a problem.