If you meet the Buddha by the side of the Information Highway.... 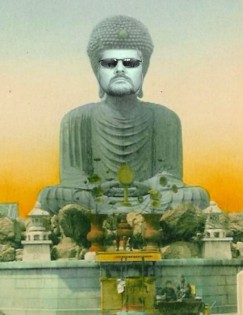 I am still listening to Alan Watts' lectures on YouTube every morning while I wait for the train. And while I still have very little clue as to what he is talking about, I sense that it is very profound.

I do like that Watts seems to constantly remind us that the truth is that there is no truth. He repeats things like, "trying to bite our own teeth" or "using a flame to set fire to itself." He also pretty much takes a dump on religion.

Watts does talk a great deal about our desire to hold onto our sense of self and how futile that is. He does allude to the fact that death is simply a respite from living (or something like that). And he implies that everything is an illusion. He also points out that everything exists because it's opposite exists (i.e. you can't have good without evil because you wouldn't know what it was without its opposite).

So Watts does keep you chasing your own tail a great deal. But I like that. It somehow helps me to know that there is no concrete truth and that we are better off just living than worrying about dying.


One of the troubling things I find about Watts is that he died at the age of 58, which is fairly young in the scheme of things. He was born in 1915 and died in 1973. Coincidentally, my father was born in 1915. I was a sophomore in high school in 1973 and went to Disneyland for the first time that year. I was also born in 1958. So if you believe in numbers connecting things, Watts and I have a lot in common.

Watts does seem to encourage us not to spend so much time thinking. Though he seems to have done his fair share of thinking. And he talks a great deal about the origin of words while he lectures which I find a bit distracting. Because in the scheme of things, a word is just a word.

Watts reminds me a bit of an English professor I had at Boise State University. He used to stand at the front of the classroom chain smoking cigarettes under a "no smoking" sign. And he seemed to be pretty profound as well. He was the person who inspired me to give up being a business major and pursue something more academic. When I went to thank him the following semester, he had left the University and I never saw him again.

He despised Walt Disney, by the way.

Maybe it's listening to Watts or maybe it's the ten minutes a day I spend meditating with my meditation app. Or maybe it was reaching Tier 100 with the Battle Pass on Fortnite. But I do feel a bit more at peace these days.

Wait, is that the sound of one hand clapping I hear?
Posted by Time at 10:50 AM

Apparently I forgot I needed to moderate my comments and missed this. Sorry Baggy, what was your question?