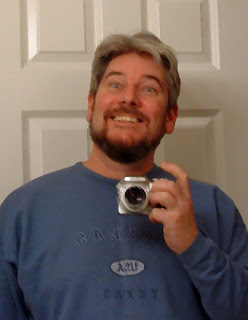 As I stare forlornly at my blog stats, I regularly see posts I wrote back in 2006 being viewed now, thirteen years after they were written. And as I reread them, I can't help but think they were pretty darned good. I think 2006 was my peak year as a blogger. Which is pretty sad considering I was not quite two years into this medium that was relatively new at the time. The above photo is a 2006 selfie I took in the bathroom mirror (this was before I had a phone that could take selfies). I took the photo to Photoshop my face onto various things as was my habit in 2006 (and more or less every year).

As much as I'd like to believe that I blog for myself and don't need an audience, in 2006 I had an active group of people who regularly read and commented on my blog. Their positive feedback did influence my writing at the time.

For whatever reason, all of the people in my blog community at the time moved on, dropped out, or found other outlets to amuse themselves. It's not like there were thousands of people who read my blog anyway. I think at the time there were maybe ten regulars at the most. So it's not like I ever went viral or was discovered.

This was before social media really overshadowed everything, too. In retrospect, I never really rose to any degree of success as a blogger. So I can't really lament languishing in relative obscurity now.

Sometimes I feel like I'm the only one with a lampshade on my head at a pity party.

Putting feeling sorry for myself aside, at least I have stuck with it. Blogging has helped me through some hard times. Writing in general has always been cathartic to me. It has been a sorting room for many a confused thought. I suppose I could have just kept a private journal like I suggested many bloggers should have. But let's face it, part of me harbored this fantasy that there were people out there who would read by blog and relate to it. I sort of felt that way in 2006.

But it is now 2019. I gave up on themed blogging weeks. I don't Photoshop my face on random objects as often as I used to. Spoofing spammers is now a bit trite and cliche. I refuse to rant anymore about Trump. I think I ran out of childhood stories. Both of my parents are dead and the house I grew up in is long gone. I can’t really write about my work. Complaining about how bad cable companies are seems pointless. Philosophy interests me, but it isn’t really a hot blog topic (though I’ve written about it quite a bit). I’ve tried reposting some of my more popular posts without much success. I tried promoting my blog on Twitter, Facebook and Instagram. I even tried creating videos on YouTube. And I can’t even remember how many times I’ve written posts like this one, bemoaning how much of a failure I’ve been as a writer.

Its pithy comments like these that make blogging all worth while.