To delete, or not to delete... 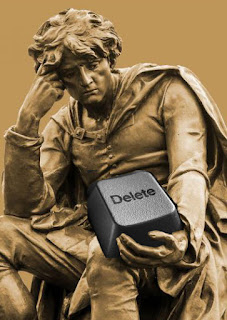 I pride myself on generally being able to begin writing with a germ of an idea and expanding it quickly into a cogent (if not necessarily entertaining) blog post without a lot of editing or rewriting. I may not be able to improvise playing music, but I have always seemed to be able to improvise writing on just about any subject.

But after 15 years and 1345 blog posts, I'm starting to notice that sometimes the stuff doesn't flow as easy as it used to. For one, I think I'm running out of things to say. Which is kind of ironic, because the blog post that prompted this one was one I just deleted called Talking about yourself. It was prompted by how I feel about blow hard's who can't talk about anyone but themselves.  This led to a declaration that I don't really like talking, period.

Then I realized that all I generally do is blog about myself. So I deleted the post. Because sometimes even I can't deny how self-centered and boring some of my blog posts are.

This is where feedback (something I truly hate) would be nice. When people used to read my blog and comment, I at least had some indication that I was being entertaining or educational or thought provoking. But no one but spammers leave comments anymore. And the joke is on them. Since no one reads my blog, no one is reading their spam either.

I can take some comfort in that.

Reflecting on things, it is not just my blog that doesn't get comments. In day to day life I don't get much feedback anymore. I don't hear, "Nice haircut" or "You look nice today." I don't hear many "thank you's" or "you did a great job on that," either.

Part of that is the politically correct world we now live in where everyone is afraid to make any personal comment about anyone or anything. And part of it is that dreaded invisibility cloak age puts on me.

I am speaking at a conference at the end of the month. I keep getting marketing e-mails from them asking me to attend the conference and listing some of expert speakers who are going to be there to entice me to attend. Then they list me and show my photograph.