Social distancing down the bunny trail 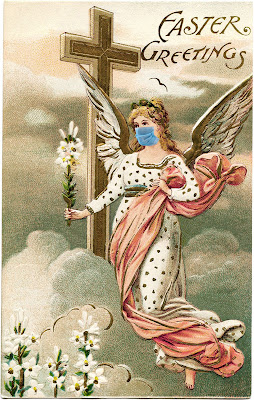 I was tempted to post an image of Jesus on the cross wearing a face mask, but I figured that might be too much for any nut job that wandered in here by mistake. It has been quite awhile since I had any trolls flame me, but I'm just not in the mood.
I have stated unequivocally stated on many occasions that I am not a religious person and do not believe in a god. The current pandemic has confirmed my disbelief in one. I have considered the current state a wake up call from nature that we haven't heeded any other signs including global warming, hurricanes, tornadoes or Donald Trump so maybe we'll pay attention to a killer virus.
Though I can't help believe that once this has more or less passed, people will talk big about how they've changed, then shrug and get back to mass consumption and ignoring their neighbors. Even pandemics don't seem to be able to change most people's inherent natures.
We plan to dye Easter eggs on Saturday and try to keep some semblance of normalcy for the kids. They are past the age where they want to attend mass Easter egg hunts and get their photos taken with the Easter Bunny anyway. And not being church going people, not being able to go to a Sunday service has absolutely no impact on us.
I remember the congregation at church when I was a kid singing, "Every day will be an Easter" (a Christian Scientist hymn) and thinking if every day was an Easter we'd get sick of all the candy. I'm not sure that's what the author intended, but it was basically what Easter meant to me, dyeing Easter eggs and chocolate bunnies. These days I don't even eat chocolate so dyeing eggs will be the highlight.
Other than walks, I don't really go out anymore. I went with my wife to the grocery store last weekend and got stressed out by all the people going the wrong way in one way aisles that I agreed to stop going.  My wife reminds me that I am over 60 and take medication for high blood pressure so I shouldn't be taking any chances. I even broke my tooth on an unpopped popcorn kernel the other night and chose to forgo a dentist visit until late in May just to avoid the risk of going to downtown Seattle. Fortunately the tooth was a crown and doesn't hurt.
How does that relate to Easter? Well I broke a crown and Jesus wore a crown of thorns.
Thought you had me there, didn't you?
Posted by Time at 12:51 PM