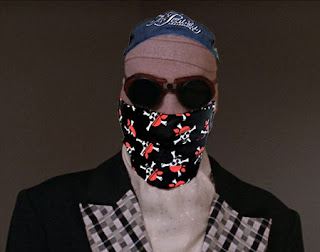 I spend almost eight hours some days on video meetings. And I still feel as if no one sees me. Still, it is sometimes nice to turn off my camera and be invisible because no one notices. I was in a meeting yesterday afternoon with a bunch of Web developers and none had their cameras on. Apparently it is an IT thing. But as they jabbered on about techno stuff that didn't mean anything, I didn't say a word and I was invisible.
Even when I take one of my many walks, some people approach you as if you are not there and I inevitably am the one to step off into the road to let them pass. I don't wear a mask much when I walk because it seems to be unnecessary. I never come within six feet of anyone but my wife or children. But I think I actually think I would prefer wearing a mask. Because then, although not truly invisible, I become faceless. And then it doesn't matter whether I smile at the passing people or not.
We made fun of the people who wore masks in the beginning. Now it is becoming more common to glare at the ones who don't. Because, locked up in our homes with NPR and constant digital news about the latest on COVID-19 is creating a paranoid nation. Hell there was news of two cats testing positive for the virus yesterday (but on the positive side the news said both are recovering nicely). But I wonder how many people are now avoiding their pets.
The sadly ironic thing is that we are all afraid of something that is also invisible. It is everywhere and no where. You can even have it and not know it. It is the ultimate bogeyman.
I walked through a park with my daughter the other day and a mother was sitting in front of a sign saying the playground equipment was closed to help prevent the spread of COVID-19. The woman was watching her two children as they climbed all over the equipment.
Maybe the woman has never heard of the bogeyman.
Posted by Time at 9:09 AM