I wonder if even Tom Robbins gets the blues? 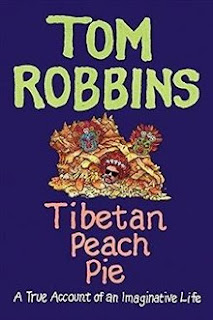 I ordered a copy of Tom Robbins memoir, Tibetan Peach Pie and even started reading it (I stopped reading most books that didn't rhyme when I had kids).  It is reminding me why he is my favorite author and why reading his books in the first place inspired me to want to be a writer.
For the record, I still want to be a writer.
I imagine Tom Robbins is locked away in his home in LaConner, Washington staring at the Puget Sound and thanking his lucky stars he doesn't live in Pioneer Square in downtown Seattle anymore. It is hard to know what Tom Robbins would be doing.
I actually have seen Tom Robbins in person twice in my lackluster life. The first time was at a lecture at the University of Washington where he was asked to speak about love. Someone asked him how to make love last and his response was, "Make love first." I thought that was genius.
The second time I saw him was at the Blue Moon Tavern in the University District. He was one of the judges of the Darrell Bob Houston Literary Award in honor of one of his friends he'd worked with during his years working for newspapers. I didn't interact with him. I was just another barfly on the wall so to speak observing from afar. It took him awhile to show up.
While I waited I recognized one of his friends, Walt Crowley, a Seattle writer. I had met Crowley through my job. He was always pitching local agencies to pay for vanity press books that he would author. Crowley always wore a bow tie and I found him pompous and condescending. I watched him approach the bar and order a beer, "Bar keep, tre ordinare please."
I told you he was pompous and condescending.
Eventually Tom Robbins showed up with a young woman on his arm. I didn't get close enough to meet him or even hear what he said. It was getting late and I had to get home.
So that is as close as I ever got to greatness. But as I read his memoir, I feel like I know him. But then again as I read each of his books, I felt like I knew him. That's what makes him a great writer.
The memoir includes a forward by Robbins where he provides a P.O. Box address where you can write him and I've read he responds to all of his "fan" mail personally. I am not sure how that is possible, but I am thinking about writing him. Not sure what I'll say. I'm tempted to send him my blog address. But I've also heard he doesn't really do electronics. He wrote about still using a typewriter in Still Life Woodpecker. Though in one interview I read, he cautioned the interviewer not to believe anything he'd read about Robbins on the Web. But he liked that many perceived him as a mystery man.
So I doubt he'd read my blog even if I sent him the address. I've tried to subtly get lesser celebrities to read my blog before with no luck. But then again, I've tried to not so subtly try to get people in general to read my blog with no luck.
Tom Robbins did say in the interview I read that the less people know about the author, the more they can immerse themselves in the author's words without projecting the author's life on the storyline. I am paraphrasing here, but that is what I believe he was saying.
I suppose it is true. It is hard not to put your personality or personalities in the stuff you write. I do it all the time, but then again, all I really write about is me anyway. Even when I am writing about Tom Robbins.
But I do wonder if even Tom Robbins gets the blues. Especially during a pandemic.
Posted by Time at 3:53 PM