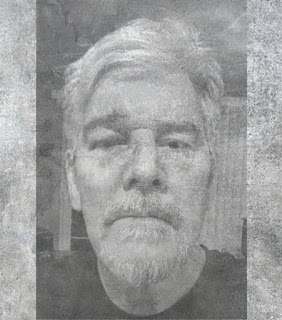 I live in a gray and white world, literally and figurative. At times it seems like there is never sunshine in the Pacific Northwest. The sky always seems gray and blotched with drizzle. It seems worse than it was when I first moved here more than 40 years ago. Maybe it is climate change. Maybe it is just me aging, graying and whiting.

My hair is gray and white. I am like a printer running out of ink. I am fading.

Maybe it's the pandemic or social unrest or the economy or the war in the Ukraine that making me gray. Or should that be blue?

Was it a coincidence that Oscar Wilde's character was Dorian Gray? But I suppose his portrait grayed while he stayed black and white. Though I wish I had a portrait that grayed and aged while I stayed the way my mind sees me -- young and strong. The mirror, however, betrays me.

Which is why I try to avoid mirrors. But there are times, like when I am getting my hair cut, that I can't avoid the mirror. Even on the endless video meetings I am forced to stare at my gray face and double chins. More than two years of this has taken its toll.

And speaking of being invisible (there's one of those old digressions) there is nothing like being in a video meeting with about a hundred people that makes you actually invisible. No one really sees you. If they did see me, I wonder if they would think they are tuning in an old black and white television show.