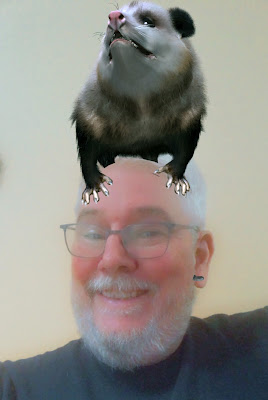 Nothing like a random filter from Snapchat to inspire a blog post. I'm not even sure what product the opossum filter was supposed to be promoting. But the first thing that comes to mind when I think opossum (not that I think about them very often) is the concept that a opossum will pretend it is dead if it finds itself threatened. A quick Google search suggests that the opossum doesn't actually play dead. The fear actually triggers a catatonic state in the animal so it appears dead.

Regardless, most opossums I've seen actually are dead. Thus the joke, "Why did the chick cross the road? Answer, "To show the opossum that it could be done."

On another random note, I was at a conference in San Diego many years ago and attended a lunch session at the San Diego Zoo. One of the zoo keepers brought in a live opossum and urged us all to smell it. Not sure what the point was, but the opossum did smell pretty darned good.

Now that I've exhausted most of my relevant facts about opossums I'll digress about other random things. Before writing this post, I toyed with writing another post about how I am insecure about whether or not I'm funny. It was triggered by my son's reaction to a Christmas card I made him that said, "All I want for Christmas is an NFT." On the inside was a photo of his cat with a funky grin and a sailor hat. The caption read, "How about an NFC (Non-fungible Cat) instead?" I thought it was extremely clever.

Which led to the desire to once again write about how funny I think I am versus how funny I actually am. But a quick search of my past blog posts confirmed I have written about that same topic way too many times without resolution or anyone coming to my defense.

As if on que, my playlist on Amazon Music just started playing "Die gedanken sind frei." It is a German song that translates, "My thoughts are free." This particular version is sang by what sounds like a military choir. I find it quite ironic.

I think we sang this song in my high school German class. I added it to my playlist after hearing it on a Netflix series called "1899." It is a supernatural thriller about a German ship captain on a Titanic like steamship full of primarily German passengers. But it was recently purchased and retrofitted by an English steamship line. The captain keeps having dreams about his wife and two daughters who died in a house fire. In the dream his daughter sings a haunting version of "Die gedanken sind frei."

I watched several episodes of "1899" but it got too weird even for me so I haven't completed it.

I survived yet another Christmas and I am bracing myself for yet another new year. This one brings with it a milestone that used to signal retirement for past generations. I am reminded of it almost daily by mail from insurance companies urging me to apply for Medicare. It was bad enough when I started to get persistent mail from AARP.

I hate to break it to all of them, but I don't think I'll be retiring anytime soon. At least not by choice.

Oh well, this opossum has come to the end of this post, proving once again I can definitively write about nothing as good anyone.