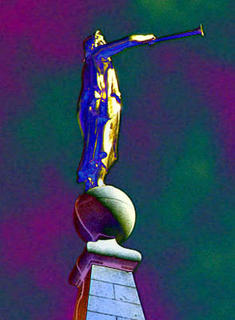 According to Blogger stats, this is my 200th blog entry. I don't know whether to be proud or disgusted that I've racked up that many random thoughts in one place. Plus I haven't changed the world. There's that small detail.

I saw some story on television last night (I think it was Entertainment Tonight) about blogging. They had some obscene statistic about maybe 15 million people out there who are writing blogs (they call themselves "bloggers" the reporter said). They defined blogs for the non-blog public as essentially Web diaries and pointed out that people are writing daily descriptions of all aspects of their lives.

Okay, I take offense at that gross generalization of what we "bloggers" are doing. I've written a couple of entries about how I feel about blogs as diaries. No one really cares about the mundaneness of our everyday lives. Or at least I don't care.

WARNING: OBLIGATORY DIGRESSION FOLLOWS. YOU MAY SKIP OVER IT AND CONTINUE WHERE I WILL EVENTUALLY RETURN TO THE MAIN POINT OF THIS ENTRY OR HUMOR ME AND READ THROUGH IT.

This reminds me of this guy I met years ago on a Windjammer Barefoot Cruise. For the non-cruise literate, a Windjammer Cruise takes place on a restored sailing ship and holds maybe 40 or so 30-somethings who want to believe that, by cruising on a sailing ship, they are somehow cooler than people cruising on traditional cruise ships. In a way, when you are younger, it is cooler. But trust me, as you creep into middle age, taking a cold shower every morning in a bathroom so small that you can literally sit on the toilet, shower and brush your teeth at the same time begins to wear on you.

But I digress from my original digression.

I met Bill on a Windjammer Cruise ten years ago. And when I say I met him, I don't mean in a romantic kind of way (I'm a happily married heterosexual man). I simply shared a cab with him from the airport in St. Maarten's airport to the ship and we became friends of sorts for the duration of the cruise.

Bill worked in an oil refinery in Chicago and had a very pronounced Chicago accent (lots of "dee's, dem and does"). And I hate to admit this, but I didn't mind hanging out with Bill because he pretty much always made me seem very sophisticated suave in comparison. A ripe papaya would seem sophisticated in comparison to Bill. His idea of a great pick-up technique was to drop sand on woman's thigh and then offer to brush it off for her.

Anyway, Bill also had this unfortunate habit of pretty much verbalizing anything that was in his head, including descriptions of what he was doing at any give time. He could be walking down the beach with his camera bag and be carrying on this ongoing monologue. "I'm sitting my bag down now and takin' off my sandals. I'm wadin' in the watta." A few minutes later he'd say, "I'm puttin' my sandals back on now and picking up my bag." Even laying on the beach he'd be putting on sunscreen and say things like, "I'm puttin' lotion on my right arm now." After a few days of this, I wanted beat Bill to death with a coconut.

That's how I feel about blogs that are simply diaries of the minutiae of someone's day. Who wants to read 500 words about brushing your teeth? I would highly recommend that if you blog about your life, you should only share the highlight films, not the unedited tapes.

That is why having some news program describe the entire blogger community as keeping electronic diaries on the Web is an insult. I personally blog for fun. It's an outlet for me.

But then the program when on to talk about people who had lost their jobs because of their blogs. A flight attendant lost her job because she'd post photos of herself in her flight attendant uniform. Another woman lost her job because she described the lavish places her company put her up in on business trips. The program had an interview with some kind of expert who stated that bloggers should write with the knowledge that everyone, including their employer, could read what they are blogging about and censor themselves appropriately.

Well that just sucks. I think that defeats the purpose for blogging. It's supposed to be free expression. It's just so typical that when the masses find out about something unique like blogging, they have to figure out a way to regulate it and zap it of it's soul. Next thing we know we're going to have Congressional committees investigate reform policies and how they can regulate the Blog community. Will we resort to typing our blogs onto CDs and tossing them out the window to prevent people from proscecuting us for our thoughts? Would that be the equavalent of writing an anonymous note, placing it in a bottle and tossing it into the ocean?

Oh well, I suppose the one thing that protects us in our numbers. With 15 million blogs out there, chances are Congress will never stumble on to mine. If they do, it will take them awhile to understand the significance of such heady subjects as, "I am Tim-Elvis' Spleen" and why I'm obsessed with Photoshopping my face on to everything. In any case I'll just rat out the Monkey Playing Cymbals blog. That will keep them busy for awhile.
Posted by Time at 7:53 AM

As a kid some of my thoughts on paper had been found by my father and were scrutinized about their meaning. As a young wife the same things happened when my husband found them. I never wrote again till this summer. I have learned so much about myself by doing this and don’t want that taken away again.

teri said...
This comment has been removed by a blog administrator.
10:31 AM

I have mentioned when meeting new people that I am a blogger. Most often they haven't the foggiest idea what I'm talking about. Every now and then someone says that they blog as well. So, we exhange addresses. I find that their blog IS a diary of sorts, recording everything they ate that day, what they watched on television, and the crazy antics of "pookie bear" their new chihuahua. I feel cheated. I thought I was actually going to learn something about this person. And NOW, they have all a wealth of knowledge about me (EXCEPT what I eat and watch and television).
I like to think of my blog as a collection of essays, short stories from my life, observations of insanity, and an outlet to show my artwork.
Of course, on ocassion I have ranted about some disturbing things I am going through. The expression is helpful.
Truth is... most ARE boring little diaries. I'm sure mine as been perseived as such on ocassion.
Much like television, they can always turn the channel if they find themselves bored.

I like your blog Tim. I feel honored that I have been along for most of the ride. And... yeah you do seem to have a photoshop obsession with putting your face on everything. Keep it up. It's your thing.

Keep writing. You are great at it.

You've got the right idea about what I think a blog should be. I think we are writing a journal of sorts, but with our right brains. Thanks for following my ramblings.

PS: I think I photoshop my face on everything because I was the last child in my family. My baby book consisted of about three photos. My oldest brother had about 250. I'm just trying to catch up. :)

One of the prices of freedom is self-restraint.

Naturally, the powers that be are always happy to exercise more control over people since it validates their existence - but that isn't my definition of freedom.

I have not told anybody I blog. I don't want people to read my blog. You guys don't count, of course.

Lights, Pete, dude, you have talent. You are funny. You don't have to tell anyone you blog, but come on, let them read it. The bunnies want this to happen.

Tim, this is the first time I've read your blog, despite having seen your name for awhile now; sorry it took so long to stop by, but I'm glad I did. Of course, I was dragged here kicking and screaming by Shandi and forced to read your blog, thus I feel it is my patriotic duty to inform the Bush Administration that I have witnessed an opinion contrary to conservative thinking so that you will be properly censored. hehe

I am honored. I've lurked around your blog for some time now and have truly enjoyed it. Oh, and tell Mr. Bush I'm waiting for him :)