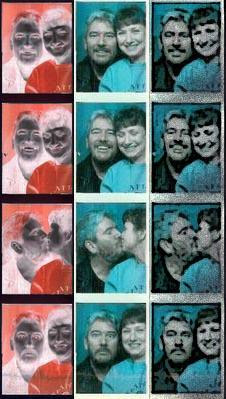 Time it was and what a time it was it was,
A time of innocence a time of confidences.

Long ago it must be, I have a photograph
Preserve your memories, they’re all that’s left you

Maybe it is middle age. Maybe it was the visit from the life insurance salesman the other night. Or maybe it is just my own mortality tapping on my chamber door ala the raven. But I've been in this frenzy of late tracing the meandering branches of my family tree.

I really began this journey back in December of last year (see My roots are showing...). I followed my father's adopted family (or at least the H**** side) all the way back to Cornwall, Devonshire, England to discover that H**** was originally Hele and that there was nothing Irish about our name.

So, having discovered my adopted Irish roots were originally planted in English soil, I turned to my mother's side of the family to trace my maternal bloodlines. My mother's maiden name was Clark. Clark is right up there with "Smith" in commonplace names, so tracing it too far back hasn't been easy. And to further complicate things, my mother comes from a long line of farmer stock that have believed in sowing seeds prodigiously. In other words, the Clark men, although not particularily successful or noteworthy in history have managed to produce huge families.

Austin was one of four kids (Mary, Cora and Thomas) born to John Clark (born 1839) and Susanna Steele (born 1843). And that is it for the Clarks. As you can imagine, John Clark is about as common name as you can get and the only record I can find for him was an 1880 census in Missouri when he was 40 years old. He was a farmer and his father was born in Alabama and his mother was born in Kentucky.

I haven't totally given up on John, but tracing such a common name is a challenge. I find it especially challenging trying to find free information on the Web because, as I noted in my last entry about my geneology experience, most of the so-called free sites take you right back to Ancestry.com or Geneology.com.

Rather than bore you with the minutia of my search, I will cut to the purpose of this blog entry. As I've dug through the records trying to find information about my ancestors, I am particularily amazed at how little information there is about people's lives left after they die. If you are lucky, you find a notation in a census log stating their age, occupation, number of childrend and their race.

I've also discovered that I don't come from a long line of over achievers. Most of my ancesters were farmers. The most noteworthy line within my family tree seems to be the McKissicks who can be traced back to Scottland (via Ireland). And one Daniel McKissick was actually a leutenant in the Continental Army and was wounded. A few of his descendants actually have more than a simple journal entry left about them (including Cornelius who shot a bully trying to jump his land claim in Iowa).

But even though my family didn't change history or leave much of a mark, I still wish there was something more left of them. I'm sure there are papers and images buried in trunks somewhere in someone's attics that could at least cast a little more light on who these faceless names were and how they made their way from Illinois, Iowa and Ohio to Idaho.

This Thanksgiving, Tess and I are going to Boise for our annual family visit. While I'm there I'm going to visit Morris Hill Cemetary where many of my relatives are buried. I'm not sure what I expect to find there. I'll be lucky if I can find their markers. But at the very least, those markers are proof that they existed. And something inside me needs that.

Because as I gaze into my family tree, I also look forward to the linage that stretches after me. What will I leave in the world? And who will care?
Posted by Time at 8:11 PM

It's nice to know where we come from. Who our family members were and what they did. It's about what we get from our family and what we give. It's as if we were here before we got here and will be here long after we're gone. It gives me peace.

I'm comfortable knowing I come from simple stock with callused hands and lives rooted firmly in the earth.

Yes, family does add context to our lives.

I've always thought of you as simple.:)

I know I'm behind the times here but that's a nice new graphic at the top of your page there. Good one.

Hello stranger, I used to know a guy that went by the same username.