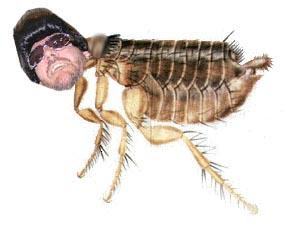 It's debatable whether it is better to be the dog or the flea. Personally, I think the flea has the advantage in most cases. He is smaller than the dog and pretty much flies under the radar. The dog may think he is in control of things, but the flea is the one that makes him stop and scratch ever now and then. And the bigger the dog, the more fleas and the more the dog has to stop and scratch. If you are a smart enough flea, you bite and move, bite and move. That's the key to survival.

It's a pretty basic philosophy that you can apply to most business situations. It's very similar to the philosophy that the soldier who sticks his head to far out of a foxhole has the greater likelyhood of getting it shot off.

I've embraced this philosophy pretty much my entire career. Going unnoticed has always worked for me. I have climbed the corporate ladder in a zig zag pattern that has to date avoided snipers. It hasn't showered me with a great deal of prestige or respect, but there has been a certain amount of stability. There' s always food on the table and a big screen television to watch.

Oh, there was a time that I considered being successful. But I weighed all of the pros and cons and figured being mediocre was a more realistic ambition. Sometimes you just have to lower the bar to achieve your goals.

I know this philosophy goes counter to most of the inspirational mumbo jumbo you are bombarded with on a daily basis by mass media. I'm just here to ask you to consider that maybe, just maybe the glass really is half empty. And just considering that possibility frees you of all of that pressure to put a positive spin on all of the crap floating around you.

So next time you are tempted to say, "Have a nice day," to someone (which is pretty much like rubbing their face in the fact that they won't) why not simply say, "Hey, have whatever kind of day you can." Just those few simple words of indifference could make a difference. Or not.

"Have a nice day". One day I was in a crappy mood. It hit me that this is one of those phrases that people say and never really mean. They don't really care if you have a nice day or a real shitty day, as long as you don't bother them with it.
So one day, after being asked "How are you?"... another one of those indifferent pleasantries... I snapped...
"Do you really want to know.... or would you rather I just say, 'I'm just hunky dorey' so that you can go about your ohhhhh so important business...or would you stop to listen about how someone busted the back window out of my minivan, my electricity was turned off because I forgot to pay my bill... not that I didn't have the money mind you.... no I just forgot... cos my plate is too f'n full of all the other crap going on in my life... like... blah blah blah..." Of course at this point they've left me standing there talking to myself.

I'm sorry, what were you saying Tim. I was all into myself for a minute. :)

I'm with you on this one. I am the only social worker left where I work. One by one they were all reassigned. I like what I am doing very much so I am trying to stay low and not attract attention. I figure some day someone will notice that I am still there and think "why the hell is there a social worker over there when he could be here at the main office being miserable", but I am certainly not going to remind them.

The glass half full/empty paradigm is irrelevant in my world view. I have a glass that holds 2x units of liquid and it is currently holding x units. It is what it is.

Shandi, Keep the sunny side up! :)

Lights, Watch Office Space if you haven't already seen it and get yourself a red stapler.

R. You need to introduce your left brain self to your right brain.