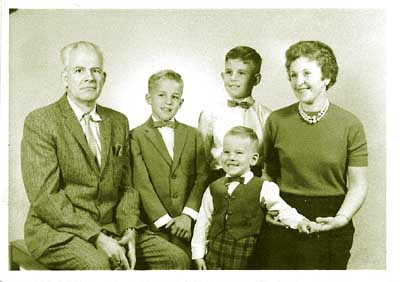 I am the youngest of three boys, so I'll leave it to your imagination which one I am in this photo. I will tell you that I've had an adversion to plaid pants ever since this photo was taken.

I turned five years old in 1963. It was a pivotal year in my life. I attended Cassia Kindergarten that year and had my first taste of regimentation of a life that had been pretty much carefree up until then. 1963 also marked Idaho's Centennial Celebration, and though I didn't have a clue what a Centennial was, I got to wear a Centennial western style tie and watch fireworks at Bronco Stadium that year.

More memorable on a national front in November 1963, I experienced the assassination of an American president on the miracle of a new medium called television.

There has been a lot of hype over the years about people all remembering where they were when they heard about President Kennedy being shot. But rest assured it is more or less true. I remember exactly where I was. I'd just come home from kindergarten pondering the crush I had on a cute little blonde girl named Christina. My mom was cooking chicken noodle soup. She had turned to take care of something in the kitchen when I reached up to grab the pot the soup was cooking in to see what it was and spilled it all over my baggy jeans. When the announcement came over the radio that Kennedy had been shot, I was standing in the kitchen in my underwear while my mom cleaned chicken noodle soup off from them. Dignified memory, huh?

This is not to say the event didn't mean anything to me. When you are five, any change in the routine is momentous. I remember my mom throwing me in the car and rushing to Garfield Elementary School to pick up my brothers, because there was a wholesale closing of everything as the nation waited in horror to see what the repercusions of losing our president would have.

The biggest one in my five year old world was the interuption of our regularly scheduled programming on the two television stations Boise supported. For what seemed like days, there was nonstop coverage of the assassination, the funeral and the assassination of Lee Harvey Oswald.

I'm not sure whether the memories are of the actual broadcasts or the subsequent years of rebroadcasts, but I have the image of John, Jr, saluting his father's casket burned in my brain. John Jr was about the same age as me, and I remember at the time wondering why he was wearing a dress (he was dressed in short pants and a long coat).

It's odd to think of now, but I was growing up admidst a sea of politically stormy times including the Bay of Pigs, the missles of October and the rash of uncertainty of what would happen in the wake of Kennedy's death. But I can tell you I was terrible relieved when, late one night as the commotion was dying down, one of the television stations played an old movie. I was practically giddy and my parents let me stay up past my bedtime to welcome the return to normalcy.

I think of this now as Tess and I plan our yearly pilgrimmage back to Boise and the memories of my youth. Tess has no memories of the Kennedy assassination because she hadn't been born yet. But she'll humor me yet again as we drive by Garfield School where my father, brothers and I all went to grade school. She'll humor me as I go on autopilot and retrace the path I'd take home from school before the spector of drug addicts and child molestors kept kids from walking more than a block away from home unattended. And she'll humor me as we stand again in the kitchen I'd stood in 42 years ago without my pants when I was a five year old listening to the announcement that someone, for some reason, had shot John Kennedy.

And she'll humor me as I recall how that five year old couldn't understand why anyone would shoot the handsome young president who seemed to be doing so many good things for the country. And as usual, she'll comfort me as I shake my head in confusion still. Because for the life of me, I still don't understand why.
Posted by Time at 6:57 AM

In 1963, I was eight, and John F. Kennedy could have been THE president forever for all I knew. To have them tell you the President's been killed kinda ranked up there with the death of King Arthur. It was my first true introduction to the idea that the world was a dangerous place, especially if just anyone could up and kill your president.

Oddly enough, it is quite possible that I would not exist if it were not for the assasination. I was born approximately nine months afterwards. I have always suspected that I may have been the result of my parents attempts to comfort each other during such a stressful time. Funny how life works.

Damn, Michael, you are old.

And lights, if one believes in reincarnation, you could well be JFK.