Getting off my high horse 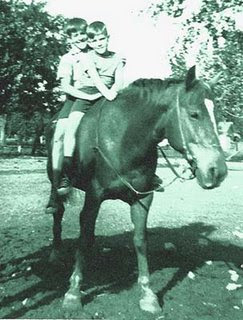 As a boy, I loved horses. This is a photo of my brother Dan (back) and I on a horse at my Uncle Jim's home in the country in Idaho. I think it was the only time I ever actually rode a horse as a kid. I may be leaving out a few pony rides at car dealers, but I think this was the only time.

It wasn't until years later that I got on a horse again. For awhile, everytime I'd go on a cruise, I'd sign up for the horseback riding adventure. I've ridden horses in Cozemel, Belize, Hawaii and Cabo San Lucas. Below is a photo of me riding Poppy in Belize. 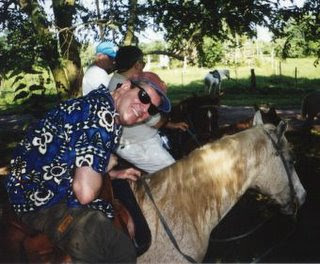 I've kind of given up on the horseback riding adventures these days. I've come to the conclusion that it probably isn't fair to the horse to compensate for my overendulgence at the buffet line on a cruise.

But I still like horses. I think that my niece, who lives in Boise, inherited her love of horses from me. My niece is probably the only person I've ever known who said they were going to save their money to buy a horse and actually did. She is 13. Tell me that isn't amazing.

Of course, I'm not sure how my brother Dan feels about it. I think that shot of us as kids was probably the only time he had ever been on a horse, too. Now his daughter owns one. Fortunately for him, the horse doesn't live in his backyard. Contrary to popular belief, not everyone in Idaho lives on a farm. My brother is a teacher and lives in a suburb of Boise (a redundant statement...all of Boise is a vast, sprawling suburb). Meredith's horse is boarded at a stable.

I kind of take this as a sign that Meredith will very likely be a very successful person. I remember wanting a horse and settling for a gunea pig. This fits into a pattern I seem to have of lowering the bar.

I guess all of this is a roundabout way of me feeling sheepish about my blog yesterday about my fellow bloggers not updating their blogs and realizing that I'm not always the most consistent person when it comes to blogging on a daily basis. I rarely blog on weekends. But, hey, do what I say, not what I do.

So I stand before you humbled.

But at least it prompted Lights in the Wake to write about his sex life.
Posted by Time at 7:49 AM

BOB forgives you, my son.

Not to worry Tim old chum. It was just what I needed. I'm gonna try to up the output to at least two a week.
I have never ridden a horse, to the best of my recollection.
I have been stalked by a vicious, man-eating donkey.
Maybe I'll post about it.

in Bob I trust! And besides, I was just horsing around.

I'm not sure the world is ready for two of your entries in one week.

And this donkey wasn't in Tejuana, was it? Because if it was, I'm thinking you are taking this sexual exploits thing a bit too far.

I have always taken it as a compliment when someone misses my blog posts. At least, I hope they mean it as a compliment. After all, we're not getting paid for this. It can be somewhat stressful though coming up with something funny or entertaining when you feel like crap.

I have alway enjoyed your blog Tim. Whether you post 3 times a week or once every two weeks, I will still be here reading it.

Great pic on the horse.

Shandi,
It should be taken as a compliment when someone misses your blog if you don't write for awhile.

But, since none of us are getting paid (to blog that is), I don't think we should feel obligated to be entertaining if we are feeling crappy. I think all of us are entitled to whine now and then.