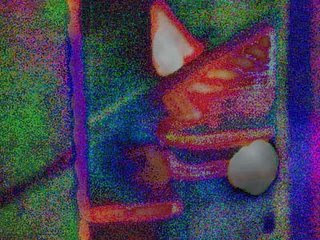 This is actually a highly enhanced image of an out of focus, low light scene out my hotel window in Reno a couple of months ago. I believe these are some of the lights of the Eldorado Casino.

Here's what it looked like before running it through a few Photoshop filters: 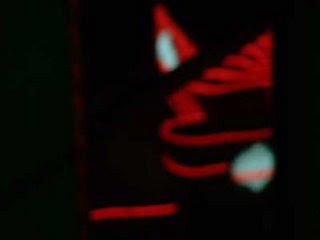 I think it would be interesting to frame and hang the altered photo and put it in a gallery. Then I'd put up a microphone and tape people as they file past it and interpret what the artist had in mind when he or she created it.

I'm sure I'd hear a myriad of explanations as to what the image is. Some would prattle on about "creative use of negative space" and "juxtapositions of light and color." Others would complain that it looks like something a 5 year old produced. But since it would be hanging in an art gallery, they would assume somehow it was art and they needed to interpret it.

The point is, that you would never know by just looking at the photo that it is Reno (before or after the Photoshop makeover). It is only because I took the original photograph that I have a clue as to what it is. And I don't claim that it is art or has any meaning at all. I do know that I kind of liked the way it looked after messing with it. So when all is said and done, does it matter if anyone else likes it or what it means?

I can't help believe that this little experiment is somehow analogous to many creation theories. And the cosmic joke in this one is that I would be god and that my creation was purely coincidental, without intent or purpose.

Just something to think about.
Posted by Time at 5:44 PM

Sacrilage! Heretic! Blasphemer! How DARE you even THINK of placing yourself above the (whatever) your BOB! Well, it is obvious that I must now strap on ten pounds of play dough and subject you to an eternity of GUMBY imitations! Huh? What? Oh. Yea, you're right. Bob doesn't need an agent at this time, he's booked solidly for the foreseeable future.
Well, shucks.........never mind.

Great shot Tim. You know those weird artsy phrases you used... something like "just a pose of engine" and something about "bad space" or was it "negative"... I don't remember. My point is, I consider myself an artist. But, I have always hated the artsy talk and the typical artsy attitude.

One of the reasons I'm afraid to pursue art full-time is that I don't want a lot of people using all that high faloot'n mumbo jumbo to describe it and then decide a price tag to put on it.

I love photoshop. Still learning but having a lot of fun with it. I love your photo. Great job!!!

Wow, that's fantastic, how much you want for it?

I knew that would strike a chord with your inner Bob. And as for Photoshop, you can't afford not to have it.

Ha, Ha, "just a pose of engine." You crack me up. I used to help artist friend write artist statements to apply for grants and commissions. The more incomprehensible the better.

I firmly believe that true art speaks for itself.

Well, I came back for another snort of DIZ and shit, same post. But what's really disturbing is the number of comments. WTF is wrong with people? Don't they realize one of the world's best blogs resides right here at this address?


the checks in the mail, right?

I watch Shandi with her photo shop and I'm amized by the things that she does. As far as me having to change pictures... I send them to her and she does it for me. Nice post but what were you feeling when you took it to photo shop?

Sorry about the same post. Weekends seem to fly by. I was going to post something about my father's time in the navy, but I decided I need more time to sort through it.

Hey, but thanks for the kind words about the lack of comments. But I'm okay with a few quality people dropping by. After all, look what fame did to Elvis.

I take lots of photographs, especially since digital cameras came along. The beauty is that you are no longer restricted by processing and the expense involved.

I learned to print black and white photos years ago in college and had a darkroom at home up until we moved last August. Now Photoshop allows me to take even the most obscure and bad photo and have fun with it. So I wasn't really thinking anything when I started messing with Reno Abstract.

Because altering digital photos with Photoshopis like a box of chocolates. Someone else has always eaten the carmels.