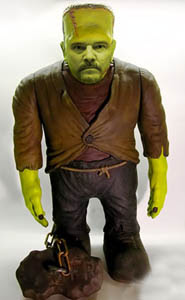 I never found the Frankenstein monster particularily scary. I suppose when Boris Karloff's interpretation of the creature appeared on the big screen, it was frightening. But it seems just laughable now. Ed Quinn took care of that when played Herman Munster in the 60s television series and turned the monster into sitcom joke.

I have read Mary Shelley's book that started the whole thing -- Frankenstein. She never really intended that the creature Baron Von Frankenstein sewed together out of old body parts would be a monster. It was Dr. Frankenstein who was intended to be the monster for trying to play god and create a man without going through the proper channels. And the problem with Dr. Frankenstein's creature was that he could bring it to life with a bolt of electricity, but he couldn't dole out a soul. The book explored the moral issues of what defines a person, the living body or the soul. I don't think the question was answered.

Still, it is an interesting question. There was nothing more frustrating as a kid than to buy a monster model kit, begin putting it together and then discover that some of the parts were missing. An even more interesting dilemma would have been if the kits came with a disclaimer: Soul not included.

Regardless of who glues together the parts, I think there are lots of people out there missing a few crucial ones. Few people would argue that monsters like Ted Bundy or Gary Ridgeway either didn't have souls included or they just weren't attached correctly. Regardless, somebody wasn't following the directions. Who was it?

At various times in my life, I've looked in the mirror and tried to see my soul. Because I'm pretty sure my mother told me I came with all of the parts included. I look into my eyes. And I look at the creases in my skin. Then I blink and I wonder. Wouldn't it be easier to know that you are truly complete if you could actually see the soul?
Posted by Time at 6:25 AM

Well, there's a simple test for that: Have you commited multiple ritualistic slayings lately? No. Then you are ok.

I often wonder what it would be like to be inside another human being and look through their eyes, kindof like exchanging souls. That just sounded terribly infantile. I've never stopped wondering those things that I did as a child.

I've heard people say that they can look into your eyes and see your soul. What is this? What is it they see? I've also heard those in the medical field describe something that happens to a person's pupils at the moment of death, as if maybe the soul is leaving. Kindof creepy, but interesting.

Shandi, I think most people's problems stem from ignoring those things they wondered about as a child. I've pondered similar things, especially about the eyes. Though I imagine vision impaired people would take exception to the theory of the eyes being the windows to the soul.

Just stopping by per Kristy's request to check out your sock monkey. Scary.

I saw an interesting typo in this blog. "Ed Quinn" playing Herman Munster. It was Fred Gwynne. But Ed Quinn sounds like Ed Gein, who was a very horrific murderer and the inspiration for both Psycho and the Texas Chainsaw Massacre.

Big Dave, Any friend of Kristy's is still welcome here. She brought the sock monkey on herself.

And you are right, it was Fred Gwynne. His father was the commedian Ed Gwynne. Ed Gein was missing a few parts, too. Maybe that was why he kept cutting them off other people.

It might very well be that a soul is required in order to have empathy, which is totally lacking in serial killers and such. Maybe there are a finite number of souls and when the birth rate far outruns the reincarnation rate, there you have it. Souless CEO's, Repubicans, and serial killers running loose. You've heard them say some kids are just born evil.....well, maybe they are....evil being empty inside.

THE Michael,
So what you are saying is that the soul glass is half empty?

Allow me to expand on my previous comment (since you asked).

I'm not judging you, of course. I mean, it's only natural to be curious and a few ritual slayings here and there are to be expected.

It's just if you get up to, oh, 25 or so you might want to start wondering about whether you are as compassionate as you probably ought to be.

But, you know, it's not written in stone or anything so if it's more than that you still might be ok if you feel bad about a couple of them.