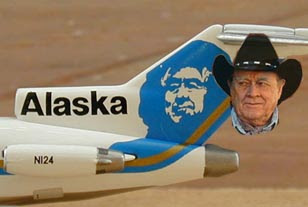 If you've ever flown Alaska Airlines you have probably noticed the large face on the tail of their airplanes. For the longest time, I could have sworn it was the face of Ben Johnson, the cowboy actor who won an Academy Award for The Last Picture Show. Now although this seemed an odd choice to me, I accepted it as just one of those things.

Eventually it was brought to my attention that the face on the tail of the airplane is that of an unknown Eskimo. That does make more sense then Ben Johnson since the airline originated in Alaska. Though I am willing to bet that not too many Eskimos fly Alaska Airlines. 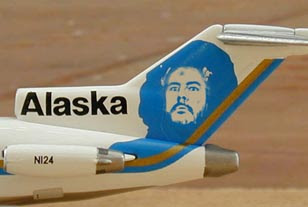 So much for my jet-stream of consciousness.
Posted by Time at 6:35 AM

Absolutely!!!! Where is the petition I will sign it!

Now really, what stream of logic did you dodge to fail to recognize a generic eskimo when you saw it? ALASKA Airlines......hello? You just needed a segway into getting your mug on that plane.........sheesh....

Next you'll be telling us how you can't for the life of you figure out why Michael Jackson had an albino hand........

THE Michael, I'm hurt. First you got to admit the Eskimo looks like Ben Johnson. And second, not all native Alaskans are Eskimos, especially down south. Finally, I don't need no stinkin' segway to excuse me for putting my face on the plane. I'm a customer. I deserve it :)

Michael Jackson has an albino's hand? That's sick. Where does he keep it? In a jar beside the bones of the elephant man? Who the hell sold that crazy bastard an albino's hand and where is the rest of the albino? Maybe that guy on the side of the plane is an albino, he looks pretty pale to me. I find it suspicious that his hand is not showing. I wonder if an Eskimo albino's hand costs more than a regular albino's hand.

On a related note:

What do you get if you cross an albatross with a rhino?

A) An albino
B) A Rhinobatross
C) A very flat, very dead albatross.
D) A new edition to Michael Jackson's collection.
E) 42

Ok, anyway, I would probably fly an airline even with your picture on the tail of their planes. Do you think we could get some kind of frequent reader program going and get some cool discounts on travel?

Lights, Being 42 is freaking you out, isnt' it? And being a frequent reader of my blog is reward enough, don't you think?

PS: Sorry to hear about your gland problems and whole man breasts thing. Look at the bright side, getting to second base is pretty much always a sure thing for you.

I KNEW there was something that you owed me an apology for--and now I've found it!

See, I never saw The Last Picture Show. But, yes, the Eskimo does look like the photoshopped face. Both of them, actually.

By the way, have you met Alaska's alter-ego?

Kristy, I am just trying to help people view their world with a keener eye. Ben Johnson very well could have been the model for the Eskimo. He's dead BTW.

So was it Skyhigh Airlines that you worked for? It would explain a few things.

Love this post and the pics. Lights... you make me laugh. Ty.
Hugs,
gina