Let's get liquored up and set things on fire! 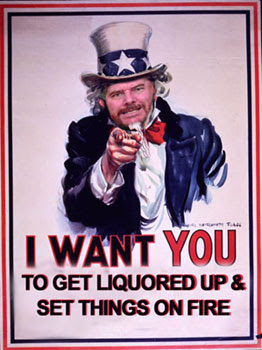 I am not particularly fond of holidays in the middle of the week. It’s like having two Monday’s in one week. Oh I suppose you could say it’s like having two Fridays, too. But that just means you don’t feel like doing anything for two days that you have to make up for on the two additional Mondays.

There is a certain logic here somewhere.

I think all holidays should be on Mondays or Fridays. I think it would improve productivity because you’d have less people calling in sick to stretch the midweek holiday into the weekend. It would also help the economy by providing consistent three-day weekends for every holiday that people could party hearty on.

The Fourth of July is an odd holiday anyway. In theory it is supposed to commemorate the adoption of the Declaration of Independence from England. But technically, the Declaration of Independence wasn’t officially signed by most members of the Continental Congress until August 2. Celebrating the 2nd of August apparently didn’t have the same ring to it as the 4th of July.

Shoot, I think we need to create a new holiday called, “Get Liquored Up and Set Things on Fire Day.” It could be held on the third Monday or Friday of whatever months we don’t have another holiday scheduled in to get liquored up on and set things on fire. They may already have this holiday in many of our southern states, but I am suggesting making it a nationwide thing.

Don’t you wish I was in charge of the country?
Posted by Time at 1:31 PM

umm... if I lived in a cement house I might. Or if I was twenty again.

I think the cement house is more likely.

Who needs a holiday to get liquored up?
I take it that means getting Pissed?, Drunk?, Intoxicated!

So you want everyone to get liquored up and set things on fire...am I understanding you correctly Tim? :)

Tim for President!!! You'd certainly get my vote :)

Hayden,
I am not suggested setting things on fire in your house. In fact,I am not literally suggesting anyone set anything on fire. It is more of a metaphor. A hot one, mind you, but still a metaphor.

Isabella, See my response to Hayden.

Missguided,
I think I am too rational to be president, but thanks!

I too don't understand how the meaning of holidays get subverted into an opportunity for ridiculous behavior. Tim for President ... certainly a far better option than what we currently have. ~JP

Hey, if you were president we could be cabinet members. I want Secretary of the Navy, tho I'll take the Coast Guard if that's all that's available. I suggest Gunter for the Secretary of State since he has a German accent. Like Kissinger.

Seriously, I dig it BIG TIME!

Lights,
I'm thinking of getting rid of the cabinet and replacing it with a credenza. Nothing too flashy, mind you. Besides, Gunter doesn't speak with an accent. He speaks accidently.

Blaznfyre,
Still a little lit up from the fireworks? Nod, nod, wink, wink!