Where in the blue blazes? 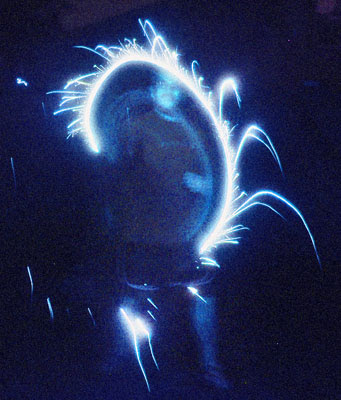 I mentioned in an earlier post that the Fourth of July used to be right up there with Christmas for me. I was a born pyro. Fireworks were banned in Idaho when I was growing up, but everyone ignored the law then, too. When safe and sane fireworks were legalized, I was about eight or nine years old. I'd save up allowances and buy the most expensive fireworks assortment I could afford. Though none did much more than shoot out sparks, we would ultimately figure out a way to alter some to provide a more satisfying explosion at some point in the display.

Piccolo Pete's were a prime example. They were this tube you'd light and the firework would issue a ear splitting shrieking sound that begged for an explosion at the end. It quickly spread through the kid community that all you had to do was use pliers to pinch the tube near the save and sane certification seal at the bottom of the tub and the puppies would blow up nicely at the end of the whistling sound.

Despite the modifications, most of our fireworks were pretty much a bust. You could burn through a whole box of them in about 10 minutes and feel pretty much gypped. I can't tell you how many times I had to endure my parents going on about how the fireworks they had when they were growing up were much more spectacular...roman candles, cherry bombs, silver salutes and of course firecrackers. Even if you could get hold of those types of fireworks from the Indian reservations around the state, you still risked encounters with the police if you set them off in your backyards. So I never really fulfilled my fantasy of setting off real fireworks.

Now I live in Washington. Most of the cities here have banned fireworks period...even the safe and sane variety. However, the prohibition is about as effective as the one they used to have on alcohol in the US. Most people ignore it. We begin hearing the explosions in our neighborhood about two weeks before the Fourth. By the actual holiday, it is like a war zone. We generally just sit inside and ignore it.

But something hit me this past Fourth of July that made me decide to give in and play with fire, too. Maybe it was those neighborhood kids setting off firecrackers who I yelled at and told me to "...shut up old man." I was going to show them who the old man was.

So on a whim I convinced Tess to stop at one of the few firework stands left in our community. I was expecting the cones and Piccolo Pete's of my childhood. Instead a discovered mega fireworks assortments of rockets, shells and the long coveted Roman Candles. I resisted the neighborhood fireworks kit that promised $1000 value for $699 and settled on the $39.00 family kit. I through in a couple of six packs of Roman Candles and stood in line to pay for them listening to the burly fireworks employee trying to foist a $300 assortment of skyrockets on some guy. The guy said he was trying to cut back from last year, but I could tell his resistance was fading. I paid for my own little modest stash before I could hear how the sales pitch turned out. I'm betting the fireworks salesman won out.

Tess eyed me speculatively as I sat in the car salivating over my selection. "Where are you going to set those off," she asked.

"In the backyard," I said confidently, as I mentally tried to picture where I could place them without setting fire to our fence, the tool shed or the neighbor's house.

"Aren't they illegal in our city," she asked with her best teacher's voice of authority.

"Everybody is doing it," I argued. She smiled tightly and shook her head, muttering something about it being a guy thing.

When we got home, I ripped open the fireworks package and lined up my treasures just like I had when I was a kid. But this time instead of Blooming Ground Flowers and Dragon's Dancing, the fireworks had names like Thermal Blaster and Missiles of October. For the first time in years, I felt that impatience for it to get dark so I could start lighting up the night skies.

Dusk had barely fallen when I called out to Tess that I was read to start setting things on fire. She threw on a Mariners sweatshirt and came outside.

"Just don't set the house on fire," she cautioned.

I nodded and lit my first fuse. The satisfying sizzle triggered my backward run reflexes and I scrambled. In seconds balls of fires shrieked to the sky. I was a man possessed. I had a new firework in place an instant after the last one was a smoking, blackened corpse. I saved the the Roman Candles for last. My parents had been right. They were pretty darned cool.

Finally, the big guns were gone and I was down to a pack of Morning Glory's. They were one step up from a sparkler. Still I felt this surge of nostalgia. I handed one to Tess who up until this point had watched, garden hose in hand waiting for the fence to spark up in flames. Soon we were both writing our names in fire using Morning Glory's as flaming pens. We giggled and ran around the backyard oblivious to the growing number of explosions coming from the neighbors who obviously had sprung for the $300 assortment of assault fireworks.

But we didn't need the Shock and Awe bombardment to make our Fourth complete. I hugged Tess as the last Morning Glory sparked out. It was great being young again. 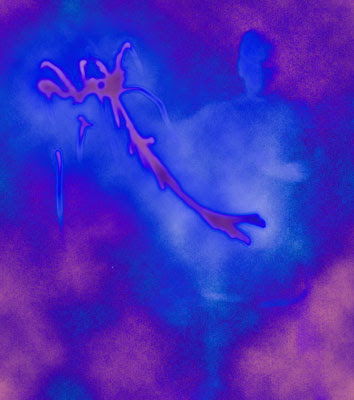 I was always afraid of the loud ones and hated it 2 weeks before Guy Fawkes or Fireworks Night as we called it. All the kids on the way to school used to let off firecrackers near animals and scare them half to death or did other more unspeakable things to them. The cruelty of kids eh?

You know what would be a cool Independence Day fireworks show? If the military dropped small yield, high altitude fuel-air bombs that burned red, white and blue out over the ocean or desert. They'd get some publicity and it would be a hell of a good show.

We don't have any fireworks here anymore ...other than the special events......

But I do remember them times when we were allowed to set em off...

Me & The Boy shot off a bunch of fireworks this year, and it felt downright intoxicating!

Amazing how something so small will you make you feel so energized?!

Isabella,
I'm not reliving them, I'm living them! :)

R. Yes, if we are going to burn money it might as well be on a large scale and colorful.

Blaznfyre,
Not suprising someone with a handle like Blazngyre would know the joy of fireworks. Burn, baby, burn!

I come here for the fireworks!