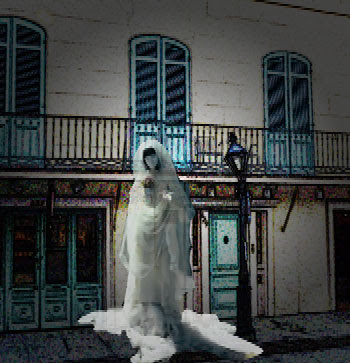 Sometime in the early 90's I met Tiny Tim and got his autograph (I still have it stuffed in a box somewhere).

You're welcome to it - my Christmas gift to you.

I really must make an effort to watch all these Christmas movies I keep hearing about. Would you believe I have never even seen a Miracle on 34th Street (I'm not even sure if that's the correct title....).

"A Christmas Carol" is my favorite Christmas movie. I like every version of it as well. As a child I remember watching the made for tv version with Henry Winkler. Loved it! My favorite is Bill Murray's "Scrooge". I watch them over and over and over again.

iridethebus,
Cool! Did you meet Miss Vicky, too? And I would love to have the authograph. I'll trade you a Jackie Coogan for it.

Gypsy,
That is a miracle. It is on every channel after It's a Wonderful Life here. The photo is of a street performer in Jackson Square in New Orleans. I took it years ago. It is one of my favorite images, thanks.

Shandi,
We just watched Scrooged again the other night. My favorite is actually the musical version with Albert Finney. I break into a chorus of "I hate people" everytime I go to the airport (or at least I did before 9/11).

HaH! It doesn't get better than The Nightmare Before Christmas. (sigh)

When I was little, I was given the Disney characters dressed as characters from A Christmas Carol. Scrooge McDuck as Scrooge. Morty Fieldmouse as Tiny Tim. Mickey as Bob.

At Christmastime, I would play with my little stuffed animals and have them act along with the cartoon.

Until my mom's shih tzu ate the eyes and noses off of all of them.

I had never thought of A Christmas Carol as a political allegory, but now that you mention it. I too love this story - did you see the Henry Winkler version - suprisingly wonderful! Merry Christmas, JP/deb

It's Christmas Day here in Oz and I just wanted to wish the Healy family a wonderful, full filled Christmas and all the happiness you can handle in the new year.

Merry Christmas to you and your family, Tim.

(the phrase "and your family" must have a really nice ring to it right now!)

Merry Christmas to all of my blogger friends! Hope you all had a great one. The Healy family certainly did!

I like A Christmas Carol, too. I vaguely remember the animated one that came out when I was little, with Mr. Magoo playing Scrooge. That was the first time I remember being exposed to the story.