Bon Voyage to the Enchanted Isle 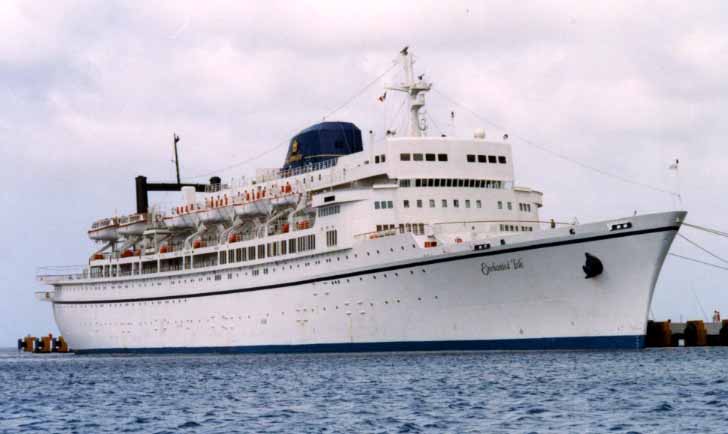 I bought a new CD of lullabies last week that was simply a collection of piano music. Most of them were beautiful medleys, combining classic soothing songs such as Golden Slumbers

and Somewhere Over the Rainbow

. I played while sitting in the rocking chair in my daughter's room waiting for her to drift off to sleep. I'm not sure how effective it was getting her to sleep, but it effectively made me drift down memory lane.

At the time I was single and unattached and had gotten over the stigma of traveling alone. I was relatively new to cruising. I'd been on a couple of Carnival Cruises (a bit too big to cruise on alone) and two Windjammer Barefoot Cruises (cool, but a bit small). The Enchanted Isle was an old ship, built in coincidentally the same year as I was born: 1958. It had first been christened the Argentina (then it became the Veendam, Brasil, the Volendam, the Monarch Star and finally the Enchanted Isle)  It had very little of the glitz of modern cruise ships. But it had a certain charm. And it didn't overwhelm you when you traveled alone.

Somehow I ended up in this funky single cabin on the Sun Deck. The cabin was nothing to write home about, but its location was perfect. It was nestled off by itself right outside a tiny piano bar perched on the stern of the ship.  The beauty was that very few people on the ship knew the lounge was there. I couldn't miss it and I soon made it my hang out.

The lounge had huge windows overlooking the stern of the ship. You'd get this stellar views of the ships wake as you plowed first down (or up) the Mississippi and into the Gulf of Mexico. If you've ever been on a cruise out of New Orleans, you'll understand the odd melancholy feeling you get watching the pitch blackness of the water punctuated with the occasional gas flames from oil rigs dotting the Gulf.

What made this lounge perfect other than the lack of crowds, view and proximity to my cabin door was the piano player. The guy seemed to play non-stop and played music perfect for the romantic back drop of the sea slipping away behind the ship. I'd sit there sipping martini's staring in the thick darkness and let the soft piano music wrap around me.

Commodore Cruise Lines went belly up in 2001, a victim of rising fuel costs and the marketing power of the mega cruise ship lines. Just out of curiosity, did an online search to find out what became of the Enchanted Isle. After the cruise line went bankrupt, it was laid up in Violet, Louisiana (which I assume means it became the equivalent of broke down Chevy up on blocks in white trash front yard). Someone changed the name of the ship to the New Orleans in September 2003 and then on October 24, 2003 it sailed it's last journey to Alang, India where it was broken up for scrap in December of that year.

If there is an afterlife for cruise ships, I like to think that the Enchanted Isle is gliding around the fourth dimensional waters of the Gulf of Mexico with the soft sounds of a piano serenading the salt air amidst the murmurs of phantom passengers clinking martini glasses in a Bon Voyage toast into infinity.
Posted by Time at 11:09 AM