Today is the first day after yesterday 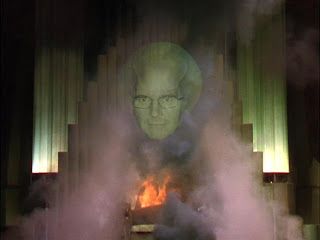 I survived another birthday. Good thing they only come once a year. It is kind of nice to be fussed over now and then, but the introvert in me cringes at being center stage in person. I'm much more comfortable as the Wizard of Oz.

It may seem odd to hear (read) a person who goes to great lengths to draw attention to themselves on the Web call themselves an introvert. One, I've resigned myself to be just one of millions of anonymous souls screaming into the ether on the Web and never really being heard. Two, even if I was discovered as a writer, I have the security of the two-dimensional curtain of words to keep me covered. In toddler terms, my writing is my fuzzy.

I used to want to be a novelist. But you know, I think I'm too ADD to focus on all the intricate threads of plot and character that really good novelists (and some really bad ones) have to do. I would also dread having to spend months (or years) working on a novel and then having it rejected outright by publisher after publisher. It was bad enough going through that with short stories. Not that I blame them with my short stories. I don't even know who reads or writes them these days.

Blogging is pretty much the perfect medium for me. I love the random spontaneous quality of it. I think I'm pretty good at rambling prose without a readily defined purpose. I think it is a good way to lower a bucket into the well of the subconscious and see what is going on in the fourth dimension (there it goes rearing it's cosmic head for the third or fourth post in a row).

I suppose the self-indulgent quality of my writing is why I'm not successful at it. Though I have to say, one of my favorite writers, Tom Robbins, has gained his share of success by writing self-indulgent yet brilliant fiction. I used to fancy that I wrote in the same style as him. Maybe that's why I like his work.

One of my new favorite authors is Garth Stein. I just finished his book The Art of Racing in the Rain and was truly blown away by how great it was. And he lives in Seattle as well. But he isn't self-indulgent.

Neither one of them spend much time Photoshopping their face on random images. I still have the one up on them in that niche.