Silence of the shamrocks 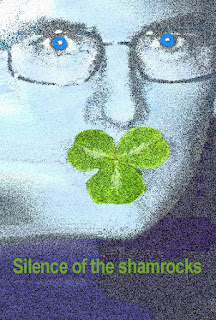 The Web is all abuzz about a shamrock shortage in Ireland threatening St. Patrick's Day celebrations on the Emerald Isle. Harsh winter weather coupled with new farming practices (treating the beloved Irish plant as a weed since it essentially is)  has severely diminished the availability of shamrocks.

Personally, I could think of worse disasters on St. Patrick's Day. It is not as if they have been hit with a shortage of green beer or corn beef and cabbage. Give me a break.

Shoot I have several shamrock plants myself. Which leads me to wonder how they could have a shortage in Ireland. I can't seem to kill mine. My cats eat the shamrocks down to the nubs every couple of weeks and the things snap right back.

And since there doesn't seem to be a shortage of shamrocks in the states, (you can find them in any grocery store around this time of year) perhaps we should organize a Shamrock Aid movement here to ship some to our friends in Ireland. I'm sure all of the various iterations of the Lord of the Dance productions could go on television and stage a telethon to raise money for the effort. And U2 and Bono are big on causes. I am sure they could bring a tear to the eye of the American public over the shamrock blight in Ireland.

And what kind of Irish name is Bono anyway? Isn't that the name of the guy who was married to Cher? Oh, after a brief Google search I discover that it is a nickname. It is short for the latin Bonovox which means "good voice." I could debate that because I'm not a big U2 fan.

I wonder if the Illuminati have something to do with this whole shamrock shortage thing. After all the shamrock is supposedly the symbol St. Patrick used to teach the heathens that used to inhabit Ireland about the Holy Trinity and the Catholic Church. Maybe we need Tom Hanks to investigate. Hold the word "shamrocks" up to a mirror and it reads "skcormahs," by the way. That must mean something. Maybe it is Klingon.

If the three leafed clover represents the trinity and the four leaf clover is considered lucky... they which fella does the fourth leaf represent? The head of the illuminati obviously. :-)

NB,
I believe the Illuminati is a code name for the fourth dimension, which brings us full circle back to my time/blog continuum post. There are no accidents in the world. Time is a circle, not a straight line. So always remember to go forward, never straight :)

My wife bought me a bottle of Guinness (bless her) and we had crock pot corned beef, cabbage and potatoes. It was good.

I could give a toot about shamrocks - and considering the inevitable side effects of the St. Patrick's day meal on my digestion that's (not) saying a lot.