Is the bogeyman made out of snow? 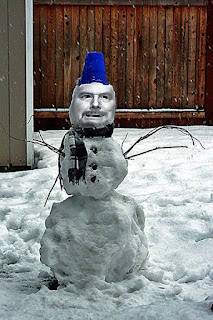 "A bogeyman (also spelt bogieman, boogeyman or boogieman) is a monstrous imaginary figure used in threatening children. This legendary monster has no specific appearance, and conceptions of the monster can vary drastically even from household to household within the same community; in many cases, he simply has no set appearance in the mind of a child, but is just an amorphous embodiment of terror. Bogeymancan be used metaphorically to denote a person or thing of which someone has an irrational fear. Parents often say that if their child is naughty, the bogeyman will get them, in an effort to make them behave. The bogeyman legend may originate from Scotland, where such creatures are sometimes called bogles, boggarts, boggers, bugaboos or bugbears."

--Definition of bogeyman from Wikipedia

Ironically, the definition of bogeyman could easily be applied to the threat of snow in the Pacific Northwest:


"Snow (also known as blizzard, slush or freezing rain) is a monstrous imaginary figure used in threatening commuters. This legendary weather has no specific appearance, and conceptions of the weather can vary drastically even from household to household within the same community; in many cases, it simply has no set appearance in the mind of a commuter, but is just an amorphous embodiment of terror. Snow storm can be used metaphorically to denote a an excuse employees use to avoid coming to work."

I shouldn't be surprised that people in the Seattle area react so viscerally to the concept of snow. These are the same people who don shorts, tank tops and sandals if the sun peeks through the every present cloud cover. If a snow flake is spotted within a 40-mile radius, people here sack the local grocery stores for supplies and run home to cower under their beds waiting for the Apocalypse.

Oh, I exaggerate slightly. It does snow heavily once or twice here every five years or so. And since much of region seems perched either on the top or the bottom of a hill, most drivers voluntarily drive their cars into a tree or other parked car to get it over with.

I try to avoid being one of those annoying people who drone on about people here not knowing how to drive in snow. Unless you are in the Ididarod driving a dog sled, no one really knows how to drive in snow. I grew up in Idaho where it snowed a lot. And yes, we drove around regardless of how much snow there was, but I lived in a relatively flat place that wasn't quite as populated as Seattle. You could slip and slide and chances are you wouldn't hit anything except an unfortunate squirrel trying to protect its nuts. So it isn't really fair to say people in Idaho were better driving in the snow. They just had more experience and less things to run into.

Still, I get irritated that the media here talks about the possibility of snow as if it were the threat of alien invasion. And nine times out of ten we get a dusting of snowflakes and it stops. Then the media points the finger accusingly at Al Gore and starts ragging on the economy until some new more promising clouds form.

I kind of miss the joy I felt as a kid when it snowed. Snow translated to snowmen, snow forts, snowball fights and hockey games in the streets. Later it meant great skiing at the local ski resort. Unfortunately when I was a kid in Idaho, snow never translated to school closures or delays.

But I do think the bogeyman lived in the coal bin in my grandmother's basement.
Posted by Time at 8:55 AM