In a Narcissistic moment of weakness back in 2006, I carved an image of my own face onto a pumpkin. Can you guess which one it was? In an ironic twist, squirrels ended up gnawing my pumpkin face off the next day. 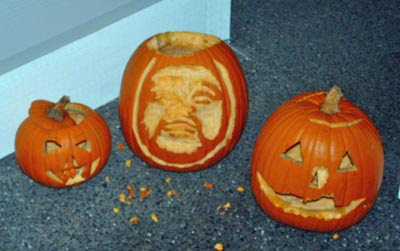 This year I carved four pumpkins: A skull, a pirate ship with a skull and cross bones, a zombie and one of My Little Ponies (I think it was Pinkie Pie or it could have been Rainbow Dash). Parenthood makes you do strange things. 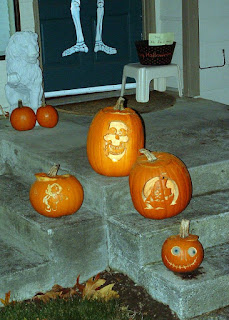 It is the same reason I'll be dressing up like a pirate tonight. My three-year old son dictated that the entire family would dress as pirates to go trick or treating. He issued this declaration several weeks ago and since has stated that he wants to go dressed as a cow, a witch, a robot, a spaceman and a spider. But we had already invested in pirate costumes so we are forcing him to remain a pirate so we will be one big happy pirate family. Though I seriously doubt Blackbird went out pillaging and pirating with his wife and toddlers in tow. 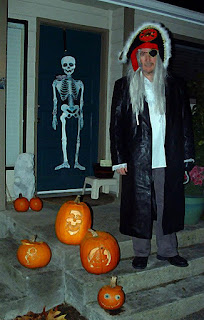 There is a plus side to all of this. I can dress as a pirate (which I secretly kind of enjoy) without being thought of as an idiot because people will look at my two young pirates and smile knowingly thinking I am only dressed as a pirate for my children and not because I am addled. I can also spout things like, "Where do pirates eat their lunch...ARRRRRRRRRRRRR-by's...RRRRRRRR" with impunity.

We will all be sporting eye patches and my son and I will be wearing plastic hook hands. These are pirate trademarks. Because apparently pirates were getting eyes poked out and limbs whacked off on a regular basis. My wife also bought me a pirate shirt that I actually think looks more like something the artist formerly known as Prince would wear (though I think he is now calling himself Prince again because no one could pronounce the symbol he changed his name to).

I won't be brandishing a cutlass because apparently this isn't proper behavior modelling for children and the local police frown on cutlass brandishing. There are more rules for being a pirate than I would have imagined.

I'll keep you posted on how the pillaging goes. Happy Halloween!
Posted by Time at 9:54 AM