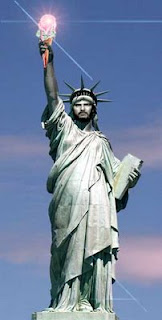 "Keep, ancient lands, your storied pomp!" cries she With silent lips.
"Give me your tired, your poor,
Your huddled masses yearning to breathe free,
The wretched refuse of your teeming shore.
Send these, the homeless, tempest-tossed to me, I lift my lamp beside the golden door!"
--Emma Lazarus, Inscription on the Statue of Liberty

Apparently, from the early 1600s through the beginning of the American Revolution, the UK used to transport criminals (major and minor) to the American Colonies as punishment. Once the colonies began fussing over taxes on tea and such, they stopped with the logical conclusion that if they shipped any more to America, they'd simply join forces with the Colonial Army thrilled with the opportunity to point a gun at their jailers. Beginning in 1788, they began sending their prisoners to Australia instead.

I sometimes wonder if that is how my ancestors migrated to America. Not that I have uncovered a great deal of criminal activity in my family tree on my forays into genealogy.  Though one of my cousin's wife did shoot her five-year-old son with a shotgun before turning the weapon on herself. This left a lasting impression on me because the five-year old was only a day older than me and I had played with him on occasion. I do recall my mother describing my cousin's wife as being high strung. I would describe her more as being a few marbles short of a full bag.

Though while I am revealing skeletons in my family closet, I do recall another cousin robbing a bank in California. I think it was a small bank, however. Other than that and a few relatives who have seen the inside of various asylums and mental institutions most of my relatives I've uncovered have been too preoccupied with scratching in the dirt or procreating to engage in criminal activities. I think crime in general would have required a bit too much mental effort on most of their parts, but that is just my educated guess.

Not that you had to be a criminal mastermind to get transported to America for life. Apparently all it took was "injuring" a bridge to get your behind thrown onto a boat for a one-way trip to New England and a life building roads for the state or sold into slavery. The punishment for returning from transportation for life was death.  In the long run, I think it was just the British way of weeding out the riff raff without having to build more prisons.

The funny thing is that I don't remember being taught anything about this in school. We were taught crap about how the pilgrims came to America seeking religious freedom from persecution in England. But the near as I can figure, they weren't really interested in anyone having freedom from religious persecution once they got here. I think the Salem witches would agree with me.

I don't imagine it would go over well if we had been taught the truth about anything in grade school. A book called Squanto, Enslaved by the British Before Being Screwed Over by the Pilgrims, wouldn't be politically correct as Squanto, Friend of the Pilgrims. Squanto, whose real name was Tisquantum, was a member of the Patuxet tribe. He was kidnapped by one of John Smith's lieutenants who tried to sell him in Spain for 20 pounds. He was sort of rescued by some monks who tried to teach him about Christ. He ended up in London and eventually worked his way back to America only to find his tribe had been wiped out by a gift of the early settlers -- smallpox. He did help the pilgrims by teaching them how to plant corn. But they never really trusted him. Squanto/Tisquantum, died, apparently poisoned by another tribe who thought he was selling them out to the Pilgrims. The Pilgrims buried him in an unmarked grave (maybe along with some corn).

The odd truth about America is that rather than a melting pot, we are more of a compost bin. This would explain Emma Lazarus' line about "retched refuse on your teeming shore" and our strong urge to recycle. We also believe in liberty, especially when it comes to the truth.

Who'd have thought one small bridge could link my past with your future.

Thanks for the inspiration for this post. It was an education for me as well!