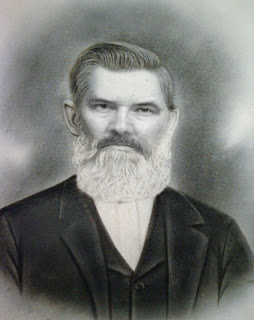 
My uncles were all men of few words. Their talk was always slow and low. I don't recall hearing more than a five-word sentence escape from any of them. Not that I spent much time around my uncles. My oldest uncle died in a small plane crash long before I was born. The rest either escaped Boise or were too immersed in their families to pay attention to many of their multitudes of nephews or nieces.

The last of my two uncles died last month, leaving me with only two aunts. There wasn't much talk about it in the family.

My father wasn't much of a talker either. He was adopted when he was five and had a growth on his throat that impacted his speech development until it was removed when he was nine. He had difficulty with certain words and would occasionally stutter. He could never say the work "Bonanza" despite all of my coaching throughout my childhood.

My father's adoptive mother was a talker. His adoptive father wasn't. It was my mother's theory that he didn't talk because he couldn't get a word in edgewise around my grandmother's babbling. My grandfather died when I was four. I don't recall him ever saying a word around me.

My father's mother lived next door to us growing up. I spent countless time at her house listening to her talk. Maybe it was where I learned to just tune out people who talk endlessly. I developed the ability to think about other things but have one ear tuned for any cues that I needed to respond to.

This skill set proved useful when I started school. The school environment I grew up in valued quiet children who listened and didn't talk unless spoken too. Rules about not talking were even imposed on our lunch rooms. Ironically I became a model student because I kept my mouth shut by nature.

Ironically, I do recall an incident in first grade where my class went to an adjoining classroom to practice a song for an assembly. Some kid was talking despite the admonishment that we were supposed to be paying attention. The older teacher in the room asked who was talking. My teacher pointed at the offender who was very near me. The older teacher stepped over and whacked me in the head. My teacher began laughing because she knew I would never have talked out of turn. I never forgot the injustice of the whole thing.

Maybe it is because I'm not a talker that I became a writer. I've always found it easier to express myself in writing rather than talking. Journalism was the perfect area of study for me. It allowed me to observe and than report on my observations.

But journalism is a dying art. It is rapidly being replaced by the projectile vomiting style of digital communications. I view Twitter and Facebook as nothing more than a digital translation of small talk.  The babbling about what people are listening to or eating is as mind numbing digitally as it is verbally.

What are the alternatives to digital small talk in the abbreviated world of social media?  Oh wait, the emoticon for "blank stare" is o.o.  Or I could just keep my tweets and Facebook posts blank.

But then people would just keep poking me.