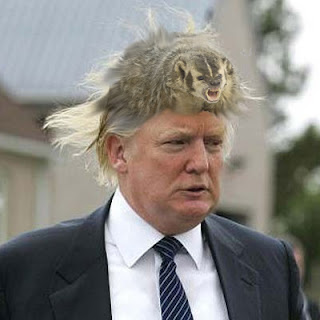 When Donald Trump first threw his hat in to the Republican candidate ring, I just ignored it like I ignore his reality shows. What was one more monkey in the cage smacking his butt and flinging feces at spectators? But as the endless polls continue to show the monkey is climbing to the top of the tree and threatening to get out of his cage, I'm getting a little bit nervous.

Okay I can forgive the fact that the guy's hair looks like someone created a bad toupee out of a dead badger. Obviously his image people solved that by getting him to wear a ball cap in most of his appearances. And so what if he is a billionaire who claims to know what the common people need. But seriously, listen to the guys idiotic ideas to "make America great again."

He wants to build an impenetrable wall between the US and Mexico to keep illegal immigrants from entering the country. And he wants Mexico to pay for it.

He wants to get the economy going by building new hospitals, roads and railroads. Okay, I'm down with that. But he also wants to cut taxes. Not sure how he earned his billions if his approach to budgeting is spend more and earn less.

Trump also doesn't believe in global warming (despite the hottest July on record ever), the EPA, Obamacare or trade agreements with other countries. He wants to slap tariffs on anything not made in America. And when asked how he is going to do anything, he tells people not to worry about the details because he'll deal with it.

I get that people are disillusioned with politics and politicians. But Trump is like Cliffy from Cheers with a "full of hot air" (or full of shit) answer to everything without a clue as to how things really work. I'm okay if Trump wants to be an arrogant asshole with his empire, but god help us if he gets elected and turns the White House into Trump Tower.  We don't need a Ross Perot with bad hair telling us he can make the country great by running it like a business. The guy has repeatedly filed for bankruptcy for his companies over the years.

So how do you make a country great again by making it bankrupt, fiscally and morally? I just hope we don't elect the monkey and find out.