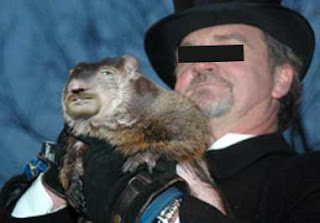 
While I'm repeating myself, I will point out that a groundhog is also a wood chuck and rather than being frightened by their shadow if it is sunny tomorrow, they should be off somewhere chucking wood. Anyway, I suppose Groundhog's Day sounds better than Wood Chuck's Day.

With all the times I've basically posted this same post, you'd think I would have done some research to discover why there is such a thing as Groundhog's Day. Apparently it has its roots in an ancient holiday called Candlemas Day, a day celebrating the halfway point between winter and spring. Farmers used to watch any burrowing animal around that time to see whether they would hang out or go back to their dens. The Germans used to watch badgers. In Pennslyvania (home of Punxsutawney Phil) they observed wood chuck's.

And to think we could be celebrating Badger Day instead of Groundhog's Day.

That would actually be kind of cool.
Posted by Time at 4:20 PM