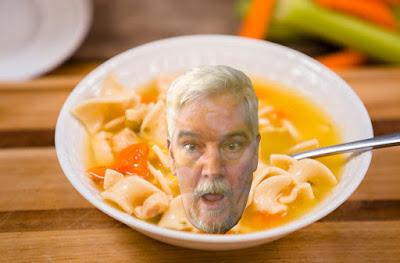 I am not a person who is prone to sickness. This is not to say I never get sick, I just don't use a great deal of sick days.  For the past several years, the only time I've called in sick is to stay home with a sick child (who more often than not were just sick of school). But last week I missed two days of work because I was sicker than a proverbial dog. Not that I know why a dog is called out for being any sicker than any other animal.

But I digress...weakly...because I am still not feeling a 100 percent well.

I've made no secret that I was raised Christian Scientist and didn't go to doctors until I was in my early 20s. So for much of my formative years, being sick was severely frowned upon and met with very little sympathy and no OTC medicines.

I've gotten past not using OTC medicines (which are for the most part useless). But I haven't gotten over the guilt of being sick. And I avoid doctors like the plague.

I don't know for sure what illness hit me last week and lingers on like an unwanted visiting relative, but it was nasty. It started with fits of coughing that made me think I was going to crack a rib. This was followed by a low level fever, the chills and a strong desire to be put in a gunny sack and thrown off from a bridge.

The bummer about staying home from work when you are sick is that you basically feel like crap and, although you get to sleep more than usual, it isn't a restful sleep. Fevers can at times trigger sleep akin to demonic possession.

My wife did consult an on call nurse with my symptoms and she suggested I probably had the flu (despite a flu shot). She also recommended a drug called Tamaflu that, if taken within 48 hours of flu symptoms is supposed to reduce the duration of the flu. Forget we had to drive to a Group Health Hospital in Everett to get some. And forget the snarky pharmacy clerk who chastised me for not wearing a mask to prevent the spread of my disease. She also informed me that one of the side effects of Tamaflu is having unusual dreams. I figured it couldn't be any worse than the fever induced ones.

So I was given five days worth of pills to take that potentially could cut the time I'd be sick by two days. Although I'm back at work, I'm pretty sure the pills had no affect on anything. Though my dreams did get a bit more bizarre than usual. I just can't remember any of them other than I think they involve me forgetting my passport and being locked out of my childhood home.

I simply sit at my desk now sucking cough drops and trying not to cough up body parts. On the plus side, most of my co-workers are giving me lots of space. The down side is that, more than usual, I'm not keen on doing much of anything which is basically frowned on most of the time in the work place.