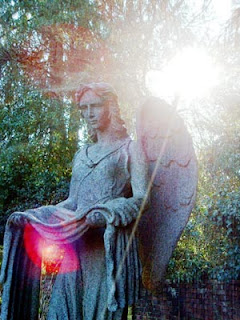 At dinner the other day, my son asked his sister whether she knew any ghost stories. She began reciting a number of stories she'd read in a book of ghost stories from her school library. It dawned on me as I sat their listening to her that I don't know any real ghost stories. I have never really experienced something that I could truly call an encounter with a ghost (though this is the second time I've pondered this in my blog...the first time was in a post called I ain't afraid of no ghosts back in 2005).

It isn't without trying. Before we were married, I used to take my wife on trips and stay at reportedly haunted hotels. We stayed at the Del Coronado in San Diego, the Queen Mary in Long Beach and Geiser Grand in Baker City, Oregon. We also stayed at Thornewood Castle in Lakewood, Washington. All reported to be haunted places. But I didn't see nary a ghost or ghoul.

I suppose if I did see a ghost I probably would regret it. Although it would give me some confirmation that there was some kind of afterlife. Though it would be kind of depressing thinking that afterlife involved hanging out in old buildings posing for random photos and moving shit around now and then.

Logic, however, dictates that there is no such thing as a ghost. There are stories, but no proof. Grainy photos with flashes of light or mist prove nothing. I can produce a ghost in minutes with just about any photo editing software. And Electronic Voice Phenomenon (EVP) and Electro Magnetic Fields (EMF) are a load of horse pucky. You listen to static enough and you'll hear lots of things. Doesn't mean it is a ghost.

What would be proof to me? I can't even say it would be something appearing to me. Who is to say it wouldn't be some glitch in my brain or a sign of mental illness? Our brains can so easily fool us. Just look at all the fools supporting Trump.

Just because I doubt there is any such thing as a ghost doesn't mean I don't think we can be haunted. Memories haunt most of us daily. Though as I age, even the memories that used to haunt me so vividly are now pretty soft around the edges and I can dismiss them fairly quickly.

Now if I could do the same to the ghosts of everyday life like global warming, ISIS and Donald Trump. Sometimes I am afraid of some ghosts.