Halloween is approaching and I wish I had some really scary ghost story like Shandi's haunted restroom. I've spent my entire life wanting to believe in spirits. I think if I actually saw a ghost, it would be pretty good evidence that there is an afterlife. But so far nada.

This is not to say that, just because I haven't seen anything that could be described as a ghost, doesn't mean they don't exist. For some time now, I've watched those "Most Haunted" programs on the Travel Channel in hopes of seeing something cool. But it never fails that, despite their night vision photography and sophisticated recording devices, I can never quite make out the mysterious sounds they claim to be hearing while mucking about in the basements of castles in England. I've been convinced on several occasions that many of the sounds are simply the sound man passing gas. Either that or ectoplasmic beings could use a little Beano.

I've been to places that are supposed to be haunted. Tess and I have stayed at the Queen Mary in Long Beach and the Del Coronado in San Diego. Both are always named as haunted hotels. The most frightening part of the Queen Mary was the cockroaches and the Goldfish Cracker I found in the bed. The most frightening thing at the Del Coronado was the bill. 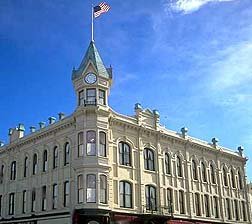 The closest thing to a truly haunted hotel we found was the Geiser Grand in Baker, Oregon. And we didn't know it was supposed to be haunted until we stayed their a couple of years ago on the way to Boise to visit family. But once again, although I managed to creep myself using the bathroom late at night (I kept thinking about that scene from 6th Sense where the kid is using the toilet and the dead people keep scurrying past the door), I didn't see any ghosts. I thought I encountered a cold spot in the hallway, but it turned out to be near the ice machine.

And ironically, the building I work in is supposed to be haunted. I blogged about "The ghosts of Union Station" in August 2004. I still haven't seen any of them.

I do think I captured a photo of ghosts on my business trip to Salt Lake City in September. I was wandering around the Temple there and took this photo of Brigham Young's Lion House: 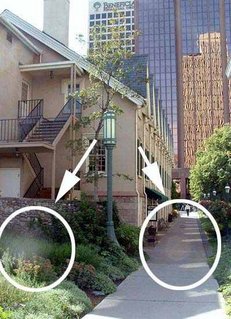 Notice the mist on the left and the telltale orb on the right. Now look at this blow up of the orb: 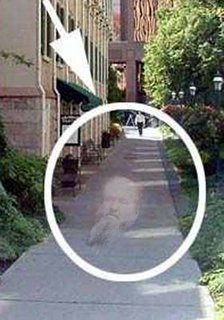 Yes, that is the ghost of Brigham Young.

The explanation I always get for never having seen a ghost (other than the one I believe I may have seen in Alaska, as posted way back) is that I am not "open " to seeing one. Like hell. If ghosts exist I damn well would LOVE to see one. Just because their existance doesn't mesh with rock solid science does not exclude the possibility that they exist due to a law of physics we are not yet aware of. I have read and listened to testimonials (such as Shandi's) from people who to the best of my knowledge have no reason to lie, so on faith I keep an open mind. Perhaps the ability to sense the paranormal is an engrained trait that comes naturally to some people and/or needs to be developed in others. Something tells me I am more likely to stumble across a ghost than a burning bush directing me to transcribe a set of rules on a slab of rock. If the truth wishes to reveal itself to me, I am more than happy to absorb it. Till then, I shall enjoy my ignorance.

I'm so glad you posted your own ghost story. Yours comes complete with proof. Wow!!!
You are going to have to share your photoshop expertise with me. I can't do those little tricks yet.
In response to Michael. You're right, I did not lie. I'm open to an explanation for the events. I've thought long and hard about the incident. After I abandoned my religious beliefs, it became even more difficult to explain the bizarre events in my life. Blaming them on evil spirits or angels was easier. I have no idea what it was exactly that I saw. I would like to think that we are made up of energy. This energy goes somewhere upon death. Where? I don't know. I don't buy into a lake of burning fire, but I do believe in some kind of life after death... or rather some kind of consciousness. It's fun to think about anyway.

I think you are pretty much right on. I'd love to see one, too, but unfortunately I seem to be pretty much too grounded in my own reality.

Glad you like my proof. The secret is layers. When you cut and paste one thing into another image it creates layers. You can edit one layer all you want without affecting the other and then merge them when you are satisfied.

I believe that all things are made up of energy, too. I know I've felt the energy in spooky places, I just haven't seen anything.

On the one hand I'd be interested to see repeatable experiments showing conclusively that there are conscious "ghosts." On the other hand I'd just as soon not encounter one. I figure live and let haunt is good enough for all parties concerned.

no no not scary freakin hallarious!!! lol that was pertty funny!! lol

R.
I think even if there was conclusive evidence a good portion of the left-brained public would rationalize it. Look how many people think Elvis is dead.

Bikinibandit,
Welcome and thank you. Though I think Brigham Young is pretty darned scary.

this shit is FAKE!!!i went to scool at marchman tech,for commercial art and we did that crap all the time!!u guys are NUTSACKS

Dear Anonymous, Really? Fake? You think so? You got me there. Who said cousins mating can't produce a freakin genius? And Marchman Tech must be one hell of a "scool" to have have trained such a sharp tool such as you.

But do me a favor. Next time you call someone a nutsack, at least have the balls not to remain anonymous you dimwitted ass.