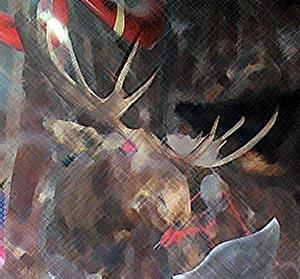 On any given day, I would not normally think about moose. For some reason, today is different. First, here's some educational material courtesy of enchantedlearning.com:

Moose are found in northern forests in North America, Europe, and Russia. In Europe and Asia, moose are called elk. Moose are solitary animals who have a deep call and a strong scent. They have a life span of about 17 years in the wild.

Anatomy: The moose is about 7.5 feet (2.3 m) tall at the shoulder. Only bulls (males) have antlers. The largest recorded antler spread is over 6.5 ft (2 m). The antlers are shed each year and regrow. Moose have hoofed feet, long legs, thick brown fur, a large body, and a droopy nose, and a dewlap (a flap of skin hanging loosely from the chin).

Behavior: The moose is an herbivore (a plant-eater) who spends most of the day eating. Moose eat willow, birch, and aspen twigs, horsetail, sedges, roots, pond weeds, and grasses.

Other than the dewlap, I really can't relate to moose. I've never really understood why the Seattle Mariners' mascot is the Mariners Moose, either. The name moose, given by the Algonquin, a native North American tribe, means "eater of twigs", reflecting the animal's primary diet of leaves and twigs. I dare you to relate that to baseball. 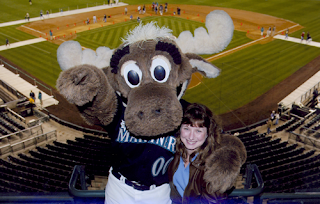 The Manitoba Moose hockey team makes a bit more sense, because bull moose are known to be pretty aggressive (perhaps because they eat so many twigs). Of course they also sometimes get crushes on milk cows (which seems pretty odd to me unless you live in Montana).

Perhaps my dewlap also qualifies me to be a member. And this is not to say that there is anything wrong with being a moose, animal or lodge member. So don't send me any nasty e-mails about it.

And why is New Hampshire, a state with the motto, "Live free or die" issuing license plates with moose on them. Since when does a moose symbolize freedom? Why is there a Web site called www.goMoose.com which claims to be a one stop place to get moose information (though it appears to be a blatant ploy to promote New Hampshire and their moose license plates)?

Okay to add to the confusion about moose, let's add mousse into the picture:
Why is it pronounced the same way as "moose?"

Okay, I seemed to have raised more questions about moose than I've answered, but if you've stayed with me this time, you realize by now that I've simply been wasting your time. But isn't that what blogging is all about?