Still crazy after all these years... 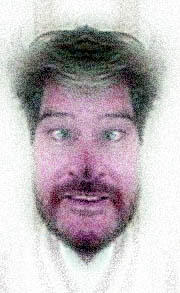 I had one leftover photo from my left brain, right brain study that I figured I might as well post. One can never have enough crazed photos of one's self. Despite the fact that is my right-brained self, it also bears an uncanny resemblance to the photo on my driver's license. Go figure.

In case any of you wondered, I did manage to get my wireless network up and running and now have nice, speedy DSL service at home. My nephew R gave me a few pointers and I managed to get some useful info off from the Web site of the company that makes the router and wireless adapter. After several hours of navigating the "Where would you like to go to now," world of Microsoft Windows, everything seemed to work. Oh, we did have a thunderstorm on Saturday night that seemed to disrupt Tess' wireless connection for a few hours, but it was nothing that eight or nine reboots and praying couldn't resolve. I am a bit apprehensive that I'll go home today and nothing will be working. But that's just the optimist in me.

Oh well, as my seventh grade English teacher used to say, "If at first you don't succeed, try, try a gun." It's little wonder I've grown into a twisted, jaded middle-aged man.

Speaking of crazed acts, I spent Sunday morning vacuuming leaves off my driveway and front lawn in the rain. I have this leafblower that also functions as a mulching leafsucker. It takes awhile, but it really beats raking. Though I'm sure I'll get home and find a whole new batch of leaves have fallen. I should just cut the damned trees down and have done with it. But then I'd be back in the business of chopping wood and we all know where that leads (plagues of wasps, dead things under your house and leaking roofs).

I'll just stick to vacuuming the stinking leaves.
Posted by Time at 5:50 PM

I need pointers on photoshop. I can't seem to figure out how to do all those fancy little tricks you seem to have aquired.
Love the photos.

I strongly recommend that you do not cut the trees down.

I vote..Don't cut the trees down. They're a good thing.

Shandi, Teri, Don't worry, the trees are safe. I kind of like the fact that I am annoying the neighbors with the leaf sucker.

And the real key to Photoshop is to master layers and filters. When you cut and paste in Photoshop it creates a layer. You can manipulate one layer without affecting the other layer until you merge them. And the filters are the things that create the fun textures.

The beauty of photoshop is that you can undo anything so you are free to experiment.