The badger has landed 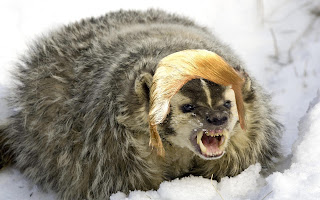 "Okay I can forgive the fact that the guy's hair looks like someone created a bad toupee out of a dead badger. Obviously his image people solved that by getting him to wear a ball cap in most of his appearances. And so what if he is a billionaire who claims to know what the common people need. But seriously, listen to the guys idiotic ideas to "'make America great again.'"


I watched the election returns coming in on Tuesday evening with a growing sense of dread. I won't say I had a premonition that Trump would win, but I didn't have much confidence that he would lose. So it didn't really surprise me. But the rate at which state after state fell to the dark hordes sickened me.

I didn't spend much time on social media yesterday. I took the day off to chaperone my son's field trip to a children's theater version of  The Lion, the witch and the wardrobe. It was actually nice not to be in the center of the hand wringing and shell-shocked reaction of most of the people I know.  For some reason their sense of disbelief annoys me. With all of my railing against Trump, I've just come to the conclusion that what happened was inevitable.


What strikes me is the amount of omphaloskepsis (navel gazing) that went on throughout the election and now post election and not a single bit of research can truly explain why Trump was running let alone elected. But at this point it doesn't matter. What matters is what he actually can or can't do in the office of president.

They said the stock market would crash once he was elected. Ironically it rebounded from several days of straight losses. So there is hope that the dire predictions of doom accompanying his election will turn out to be just rhetoric.

My true hope is that the man will flounder around in office vaguely confused as to why he wanted to be president and regret it deeply. I lived through two terms of Reagan and two terms of George W, so I'm hoping Trump will just be an annoying pimple that eventually pops to every one's relief.

So, deplorables, Trump belongs to you. And I trust you'll get what you deserve. But I imagine most of you won't know what to do now that the political rallies are over. Because I can pretty much bet that none of you will ever see Trump down at your level again unless he holds a press conference at the wall you are helping to build at less than minimum wage.

Good luck with that.

I feel your pain.