I've been to Hollywood a few times in my life. Mostly as most people go to Hollywood--as a tourist. This time I was in Hollywood on a business trip. I was in town for a few days to shoot some television spots for work. And since the production company's offices were in Hollywood I stayed at a hotel in the heart of tinsel town, the Hollywood Roosevelt. 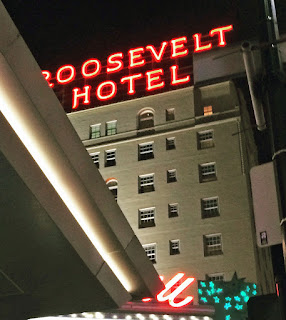 The Hollywood Roosevelt was built in 1927. It is seeped in old Hollywood history. One of the first Academy Awards ceremony took place there. It is even supposed to be haunted by Marilyn Monroe and Montgomery Cliff. Marilyn had one of her first photo shoots as a model in the hotel pool. 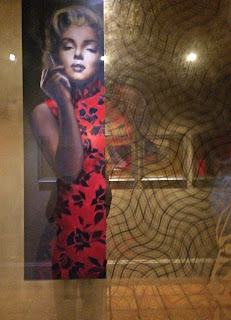 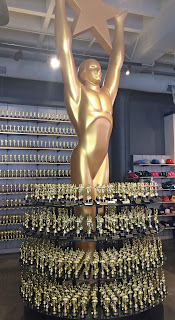 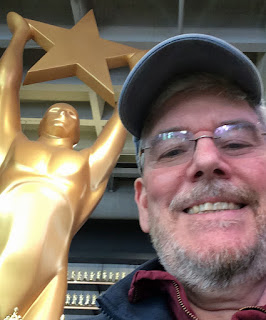 Still I was woken up several times during the night to the sounds of yelling coming from Hollywood Boulevard. The street was kind of a hybrid of Bourbon Street and Times Square. And it teemed with tourists and the homeless sprawled out on the stars of the Hollywood Walk of Fame. The street is a hodgepodge of theaters, wax museums and tattoo parlors peppered with souvenir shops. You walk the gauntlet of people passing out tour brochures, CDs or Scientology info. You also walk the gauntlet of costumed characters vying for your attention and posing for photos with hapless tourists for tips. I watched two Spiderman characters competing for selfies on the same corner while sipping my morning coffee in the hotel diner. 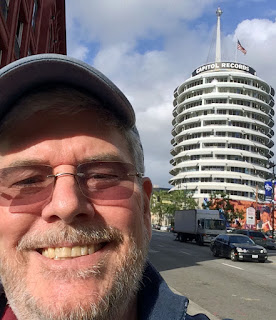 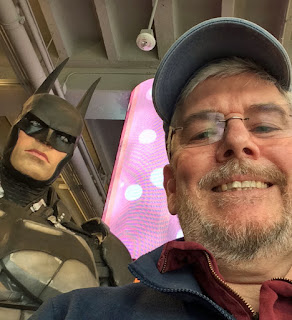 The Hollywood Roosevelt was also right across the street from what used to be known as Grauman's Chinese Theater. I think it is now just called the Chinese Theater. The place is famous for the hand prints of famous actors in cement slabs on the plaza in front of the theater. The plaza was roped off when I was there in preparation for a film premier. Vin Diesel was one of the stars and he apparently was staying at the Hollywood Roosevelt (or at least walked through it according to one of my colleges staying at the hotel). I never saw him. I only vaguely saw some of the activity in front of the theater on the night of the premier as I pushed my way through the crowds to get back to the hotel after dinner. 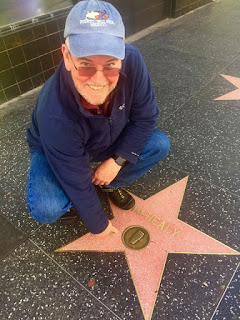 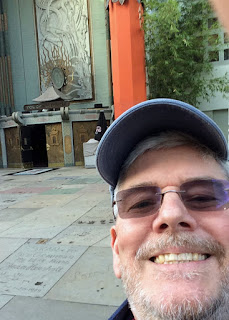 One of the thing I was most fascinated by were the stars on the sidewalk that make up the Walk of Fame. I am old enough to recognize a bulk of the older star names. But it struck me that, as with many things from the past, most of the Millennial and Generation Z tourists wouldn't have a clue who most of the people named on the stars were. Then it struck me that the sidewalk stars were not unlike tombstones in cemeteries. They were monuments that were supposed to help those named on the stones and stars be remembered. And as with tombstones, the stars weren't enough. 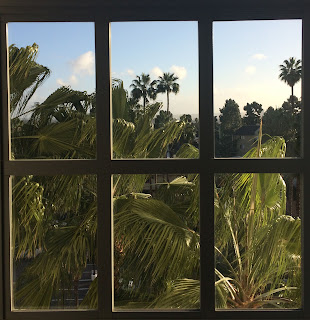 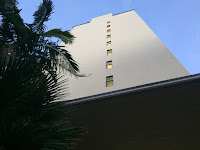 At least for the film stars, their images are captured somewhere and help keep their spirits in the minds of some. But I've discovered with my own children that any film that isn't HD is too dated for them to want to watch. So I am afraid that even the Hollywood greats will fade away to all but the hardcore academics in history of film classes. Even I remember most of the greats like Clark Gable, Carol Lombard, Humphrey Bogart, Bette Davis, Spencer Tracy, etc, only because much of the content of early television when I was growing up was old black and white films from the 30s and 40s.

Still Hollywood has an energy infused by the spirits of those Hollywood greats. Their movies may seem trite and derivative now, but that is only because everything that came after them was a slight variation of the same theme. So although I didn't see any ghosts while I was in Hollywood, I wholeheartedly believe it is haunted and haunting.

Are you sure you had time for work? You seemed to take a lot of selfies.