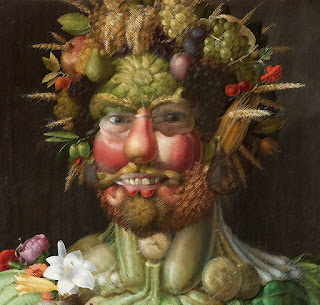 If you aren't familiar with horse tails, they are a primitive weed that looks like green surface to air missiles when they break through the ground. They have been around for millions of years. They cover everything and have a common root system that is almost impossible to destroy. And after reading about how to get rid of them, I've discovered I've been doing exactly the wrong thing for years -- trying to pull them up. Because, apparently, when you pull them out of the earth, several more sprout from the root in the same place.

The solution to get rid of them is to make the soil less to their liking by improving drainage (not easy on a slope fed by underground streams), infusing it with lime and then fertilizer. It is also suggested that you cut them down with a weed eater. This is sort of a relief because I'm very tired of pulling weeds. It does, however, present a logistical problem of running extension cords down my slope and standing at a steep angle as I battle the horse tails with a weed eater that runs out of weed eating cord every five minutes. Oh, and you are supposed to gather up all of the horse tails after you cut them and seal them in a plastic bag to prevent the seed spores from escaping.

I think it would be easier to just sell the house.

If I ever do get rid of the horse tails, I've got to figure out what to plant to replace them. I've tried various ground covers with limited success. Last year I did try planting pumpkins on some of the more level areas. I managed to grow three pumpkins that were pretty much the size of a soft ball.

The slope does have several old growth Rhododendrons that shield some pretty wicked blackberry vines. And there is still a great deal of ivy that has crept up several of the surrounding trees. The ivy jockeys for position with morning glory vines.  Oh, and let's not forget the dandelions.

I filled my compost bin, my yard waste container and a free standing pile of compost with the weeds I dug up over the weekend. And I barely made a dent in the useless vegetation that covers the slope.

Why do I bother? Because I'm afraid if I left the slope uncontrolled the stuff would eventually encompass my house.

On the bright side, I get the satisfaction of being outside and working with my hands.