There is no future in the pasta 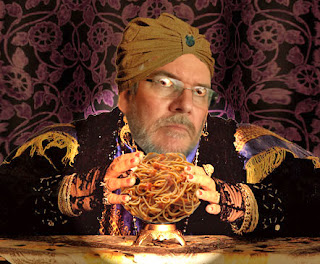 There are carbs, however. So that's something. And they do weigh heavily on our future.

If you've followed any of my meandering ramblings about living in the now and time being an artificial construct you'll know I am fascinated by the concept of life being a series of "now" and no "then." Though I struggle with letting go of then. Sometimes it seems like a better place then now.

There was a time (even though time doesn't exist) that I fantasized that all of my past "now's" were playing out simultaneously and all I would have to do was figure out how to slip into them to relive great moments. And who knows, maybe shift things around a bit to correct a few mistakes.

But "now" I pretty much believe there is no then to go back to. And let's face it, what would be the point. You'd have a few good now's that would quickly become then's and then you'd be right back where you started.


I think it is important not to try and live in the past. One, the past doesn't exist and you'd be trying to live in nothing. And not letting go of the past puts you in risk of being one of those people who think wearing clothes they wore in their 20s will keep them from aging.

Don't be one of those people. Despite the nostalgia for the 1980s triggered by the Netflix original series Stranger Things, living then kind of sucked. And the fashion generally sucked. It was an awkward era with some people trying to hold onto disco while others were thinking punk and then grunge were good ideas.

I know some people go around spouting this, "Those who don't know history are doomed to repeat it's mistakes," but let's face it, humans have been repeating the same mistakes from the beginning of time. And no amount of knowledge of history seems to make any difference.

Which reminds me of a history student teacher I had back in junior high. He never got weary of telling us not to major in history because there was no future in it.

Little did I know that he was telling the truth.