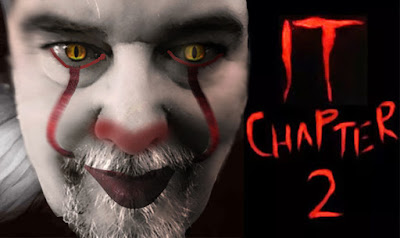 I took my son to see It Chapter 2 over the weekend. I had relented and let him stream the first chapter last year around this time. So when they released chapter 2 I agreed to take him to the theater and see it.

Okay, Pennywise the Clown (played by Swedish actor Bill Skarsgård) is as creepy as hell. But then again, I think all clowns are as creepy as hell. And It and It Chapter 2 are 100 times better than the 1990s mini-series .  And they are a munch better adaptation of the book by Stephen King (who has a cameo in It Chapter 2...and let me say age has not made the man better looking).

I think I liked It better than It 2. Both are creepy, but chapter 2 seemed to rehash the same old storyline, just 27 years later. And as with the novel, chapter 2 doesn't really do a good job of explaining who or what Pennywise is or where he came from in a way a normal person can really comprehend.

My biggest complaint about It Chapter 2 was how long it was (It was ten minutes shy of three hours long). Fortunately I was in a movie theater with recliner seats drinking a $5 bottle of water (don't get me started on concession prices). I wouldn't say the movie was slow. It made me jump several times and I'm not easily spooked.

I have to say, although the adult cast was good, I don't think they were as likeable as the young cast of the It one. The first movie had a kind of Stand by me nostalgic quality to it. Not that you can really feel nostalgic about fighting an ongoing battle with a killer clown who chewed off your little brother's arm. But you kind of got a sense that the kids in It one had created a bond of friendship that most of us long for but never really have. It Chapter 2 reveals that none of them stayed in touch for 27 years.

Anyway, It Chapter 2 is entertaining, especially if you are a Stephan King fan.

My son liked It, too.