A star is dead 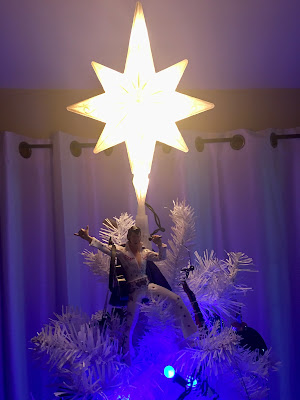 If you (and "you" know who I'm talking about) have followed my blog for some length of time, you know that each Christmas I decorate an artificial white tree with Elvis themed ornaments. It is a tradition I have carried on for almost 20 years.  I've even tried to get my children to participate (if not understand) the tradition. When they were younger, they happily did, primarily because many of the ornaments play music.

But this year I was the only one who showed any enthusiasm when, on the day after Thanksgiving, I pulled out the white tree and my ornament bins and declared it was time to put up the Elvis tree. My son, who has become quite the curmudgeon basically refused to help. My daughter played along for awhile but got distracted and began drawing on a green Christmas ball that has been in the Elvis ornament bin for years but never goes on the tree because I only allow blue Christmas balls on the Elvis tree.

So I more or less decorated the Elvis tree by myself which is fine because I like to place the ornaments in a certain order and the kids tend to just toss them willy-nilly on the tree only to be rearranged by me after they have left.

But my children's lack of enthusiasm kills any hope I had of the tradition continuing after I've joined Elvis in the great Graceland in the sky (which we know isn't on the moon). My only hope is that they will at least sell all the ornaments on eBay and not just give them to Good Will to be shoved in a bargain bin.


Still, I find the Elvis tree very soothing as I binge watch my programs in the television room basking in the gentle blue lights. But something a bit disturbing happened the other night a few days after the tree went up. I was watching an episode of The Crown on Netflix and out of the corner of my eye I noticed the star at the top of the Elvis tree flicker off and on.

And then it died.

Okay, I'm not one of those people who believe (or believed) Elvis is still alive. If he was he'd be 84 and I imagine not in great shape. But it was sad to me when the star on my Elvis tree died. It was kind of symbolic to me. I'm just not sure what it is symbolic of. But I know there is a symbol in there somewhere.

It kind of pulled on my heart strings the way it did when my children lost interest in decorating the Elvis tree with me.  I know I can replace the star or get new lights to put in it (I'm thinking blue), but I can't turn back the clock to a time that I found my one year old daughter sitting below the Elvis tree and reaching up for one of the ornaments in awe (and to my horror).

I wonder if I'll reach a point where I don't put up the Elvis tree. It will probably be the same time when I stop posting in this blog. I put up the Elvis tree every year and post in my blog for about the same reason. I stubbornly refuse to think that both acts are completely without meaning.

But then again, that star did die, and its got to mean something.
Posted by Time at 9:18 AM