Don't let the New Year hit you on the way out 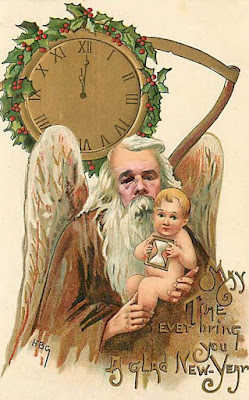 Okay, 2019 wasn't the worst year ever or the best year. But it was a year. I did manage to post more blog posts than I have since 2008 (just six shy of topping my 2008 number of posts). And despite my prolific number of blog posts and a record number of hits on my blog (thanks to the bots and whatever other software that keeps pinging my blog) I managed to have fewer actual readers than ever before.

I'm not a New Year's resolution kind of a person, so I won't make any pronouncements about 2020. I do hope it will be the last year Trump is in office. Though I just read on Twitter that he tied with Barack Obama for Time Magazine's most admired man. So I don't have much hope for humanity.

I won't say I'll post even more in 2020. Though a lack of new things to write about didn't stop me in 2019. I've slipped into blogging more and more as a release for myself since my fan base has dwindled significantly over the last 16 years.

I did learn some tough lessons in 2019 about how nasty the Internet can be. I've had to stave off hackers who tried hijacking several of my accounts due to password breeches on several sites. Apparently my old go to password was available on the dark web. I learned to develop complicated and difficult to remember unique passwords for my many accounts.

I also learned to beware deals on the Web through sites I'm not familiar with. It took several weeks going around with Paypal to finally get a refund from a fraudulent Web site called jerseyeasy.com.

I also took to social media to get a warranty on a faulty garbage disposal honored by the Moen company. They were reluctant to take blame for it leaking and said that that wasn't one of the things covered in the limited lifetime warranty. I finally called them out on Twitter and Facebook. They responded and had me send them a video of the leak. They finally gave in. My replacement garbage disposal arrived yesterday. I just have to fork out another $150 to have someone install it.

Of course there is the whole heart thing and my broken nose. I am having trouble wrapping my brain around it all because I feel fine and still spend an hour and a half a day working out on the treadmill and elliptical machines. But the new year and a new cardiologist should sort it all out.