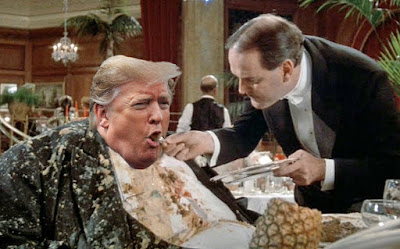 I would be remiss not to acknowledge that Trump is finally being impeached. And despite almost incontrovertible evidence that he is guilty, there is a snowballs chance in hell that a super majority of the Senate will vote to convict him. And his "deplorable" supporters are more rabid than ever in the their belief that he is the best thing since sliced Wonder bread.

So I kind of wonder, what is the point in spending all of this time, money and energy trying to pop this pimple out of the White House? The morons who support him just claim that it's all made up and the Senate not convicting him will be their proof that the constant verbal flatulence he spews doesn't stink.

The sociopath doesn't even have the decency to resign. He just keeps up his deluded blather that he is the victim of a witch hunt. Truth is, there is a turd in the White House punch bowl and the country keeps drinking out of it no matter how many times it is pointed out.

What truly depresses me is that none of the so called checks and balances of power that the founding father's tried to put in place seem to work when you place a morally corrupt mad man in office.

And I say that with the utmost respect for the office, not the mad man.
Posted by Time at 10:10 AM