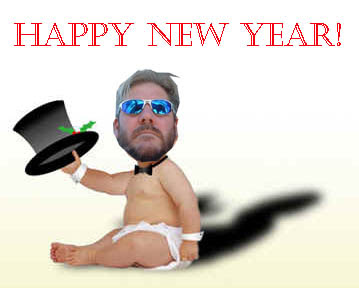 "[Do not] make vetulas, [little figures of the Old Woman], little deer or
iotticos or set tables [for the house-elf, compare at Puck] at night or exchange
New Year gifts or supply superfluous drinks [another Yule custom]."
--the vita of St. Eligius written by his companion Ouen

I'm not sure what that quote means, but it has something to do with the traditions of 7th century druids in Flanders and the Netherlands of exchanging gifts at the new year. Apparently this pissed off St. Eligius (probably because he was Christian and none of the druids were giving him gifts).

Which leads to my list of resolutions for the New Year (bloggers seem to really love lists):

I think that's about all the resolutions I can deal with for one year. Anyway, I hope everyone has a Happy New Year. Don't do anything I wouldn't do. ;) LOL :(

no please, not a mullet! crossing my fingers hoping no lists or cute lil pics show up in my e-mail since Ya don't know me well. Very cute post. ;o)
Love & Peace,
~gina~

You forgot to resolve to sacrifice shrubbery to your Lord Bob. Or to make sure to mention yours truly in each and every post in order to avoid the negative karma that would occur if you didn't. Or to mention to complete strangers in passing what a wonderfull blog MM&M is. Or to remember to forget you ever knew me due to these weird comments you keep getting.

No Gina, I definitely will never venture down the mullet path. :{

the michael, bob knows I wouldn't ever forget to drive strangers into MM&M world.

Happy New Year to you and your family!!

Well thank you Cherish and Happy New Year to you and yours, too!

Thanks Lauren, I believe in lowering the bar. Hope 2006 is your year!