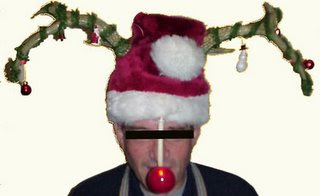 Despite "the michael's" warnings about avoiding the mall at this time of the year, Tess and I went to one on Saturday afternoon. We have a tradition every year of going to a mall and heading our separate directions to buy stocking stuffers. The rules are you only have and hour and you can't spend more than $25 total.

It's a lot harder than you might imagine, especially in the midst of holiday madness. But I lucked out this year and picked the section of the mall (after flipping a coin to keep it fair) that had a Japanese dollar store. It was chock full of gadgets and gizmo, none of which cost more than $2. The only downside is that most of the item descriptions were in Japanese, so you had to kind of guess what they were.

Anyway, I managed to fill Tess' stocking in under and hour. But in the process, I had to go to my inner happy place to avoid raising my blood pressure over the hordes of people competing with me in my quest to consume.

I'm not a people person. Crowds freak me out. The few times I've been to Disneyland I correctly see that the "Happiest Place on Earth" is actually Lucifer's training ground for moving as many people as possible through endless lines. I actually think the lines in hell will be a bit shorter.

I was doing fine at the mall after elbowing a few elderly Asian women out of my way in the Japanese dollar store. But then I started noticing the Santa hats. There is something about the sight of some idiot wearing a Santa hat that makes me react the way a bull would when you wave a red flag under his nose. I think the most infuriating thing about someone wearing a Santa hat in public is that they think they are being so clever and original. Here's a clue for you...you aren't. You aren't any more clever if the Santa hat has a baseball hat brim and reads, "merry whatever." And if you really want to corner the shit for brains market, wear a Santa cowboy hat or one of those stupid hats with ear flaps that tie on the top of that hat that's done up Santa fashion in red with white fur. A sequined Santa hat isn't any better.

I admit it. I'm not a tolerant person. At my age, I pretty much feel as though I shouldn't have to be. If experience teaches you anything, it should be how to recognize a fool. And a Santa cap is a sure sign.

So, I'm walking through the mall noticing people wearing all of the Santa hats I've described, and my eye begins twitching. It's not a big thing, but I'm really grateful that our stocking stuffer hour is almost up and I can get out of the mall. I find Tess and she takes one look at me and says, "You've seen someone wearing a Santa hat, haven't you?" I try to smile, but she knows I'm one step away from breaking out in a fake Tourettes syndrome attack. She grabs my arm and we weave our way through shoppers towards a door.

And then I saw it. Tess tried to steer me away from it, but it was too late. There was a moron standing at the men's fragrance counter of a large unnamed department store wearing a Santa Pimp Hat that read, "Ho, Ho, Ho." It was too much. I ignored Tess' death grip on my arm and go up to the loser and said, "Hey, I was going to do my impression of an asshole, but by wearing that idiotic hat, you beat me to it." I then grabbed a sampler of Grey Flannel and sprayed him in the face.

I'm lying. I kind of wish I had the guts to do something like that, but as I like to point out, "I may be small, but I'm also weak." Tess and I simply walked out of the mall without incident and I was left to vent my frustration with Santa hats in my safe, happy place: my blog.

But I really hate Santa hats.
Posted by Time at 8:17 AM

If the mad santa-hatters are exercising their First Amendment freedoms then so should you. Might I suggest an oddly shaped hat with highly contrasting attention getting colors and a slogan printed on it?

Did you ever notice that Santa rearranged spells Satan? Spooky.

I wear a beautiful old fashioned one with jingle bells so my co-workers can hear me heading down the hall. I ain't taking it off. Shame on you.

Good point. I never realized that Santa was an anagram for Satan. It's all becoming clear now.

At least you aren't opting for the sequined model or the cowboy Santa hat. But I claim blogger's rights to my opinion in the comfort of my own blog. So shame right back on you! :)