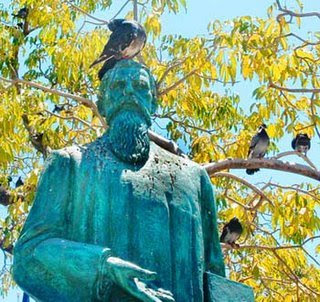 I was walking with a group of my co-workers to lunch a couple of weeks ago when out of the blue (or gray...it was cloudy) a bird of unknown origin scored a direct hit on the head of one of my staffmembers. My guess is that it was a Sea Gull. But it could have been a pigeon or even a crow.

The amazing thing was that this happened in a crosswalk with no trees or light poles around, so the bird had to have dropped its payload while in flight. This bird had to have taken in account wind velocity and it's speed as it flew. It also had to take into account how fast we were walking. Fortunately, I was walking ahead of the group and escaped unscathed.

What's even more amazing was that this is the third time this person has been hit by bird shit. And two of those times, I was walking with her. What are the odds? Everyone around her kept telling her that in some cultures a bird shitting upon you is good luck. Yeah, right.

I've only been shit upon by a bird once (not counting pet parakeets as a kid). I was walking through Pioneer Square in Seattle years ago and someone I knew was approaching in the opposite direction. They motioned for me to stop because they had a question about something. When I stopped to chat, it was unfortunately under a tree. The second I stopped walking a pigeon tagged me on the shoulder. The person who had flagged me down looked at the bird shit on my shoulder, shook his head and walked away.

I learned several things from this experience (other than the obvious, "shit happens"). First, never stop under a tree in Pioneer Square. Second, you never know when a bird is going to shit upon you. And third, never assume that birds are random about relieving themselves. Just the other day I was walking under a light post in Pioneer Square and a large mass of bird guano landed barely a foot from me. I waited until I was well past the lamp post to stop and look back. A crow stared back at me and I swear he flipped me a claw.

If I ever have a child, I'm going to impart this wisdom to them early in life. But for now, I'm throwing these pearls out there for the masses to digest as they see fit.

Just don't say I never warned you.
Posted by Time at 7:40 AM

I have been fortunate in that I can only remember having been pooped on once, and that was from an exuberant cockatiel sitting on my shoulder who I'm sure wasn't trying to be vindictive.

I HAVE been viciously attacked by a mockingbird that decided to build it's nest in the tree right next to the path leading across the lawn from my patio door to the street. I cured that problem with a few deft swings of my tennis racket.

Oh, I wouldn't be so sure about the cokatiel's motives. Birds are sly creatures and crap on everything...basically because they can.

And hopefully you didn't kill the mockingbird with your backhand. Remember your Harper Lee.

I personally have not been shit on by a bird, only by mankind.

It is funny what each one of us sees while we are reading each others blog. You said, "If I ever have a child". Tim, do you want a child? How fun if you do have one. I loved it.

I've been shit on by a bird. It hit my pant leg and immediately bleached the color out. I had to throw the pants out.

I agree with Teri. I've been shit on more by people and I will agree that there is nothing random about it.

Only the most disgusting and vile sorts of creatures use their own feces as a weapon. And you know who you are.

If I had a child, I'd teach it to watch out for birds and people. :)

Shandi,
Keep in mind it it good luck to have bird shit on you. I can't say the same for humans. But either way, it's important to look up.

Sound like you and the Mank are having a spat.

I laughed a good five minutes when I first saw the vehicle window sticker that portrays a monkey and says "I Fling Poo!"

I've had birds try to get me under a patio. The only reason they missed was because I was paying enough attention to move to the side. Nothing a shotgun wouldn't cure though.

You can take the boy out of Idaho, but you can't take the shotgun out of the boy.