One of the most important thing about Christmas to me is the memories it creates.

Seventeen years ago, I got a call from a friend of mine who I'd known since we were about 16 years old and working at the Boise Public Library. Jan and I kept in touch when we both left Boise to go to college. In November of 1989 she called me and told me she was engaged to a fellow graduate student who was from England. The were getting married the day after Christmas in the small village of Talaton in Northern England. She invited me to the wedding.

I had never been to Europe. I didn't even have a passport. I jumped at the chance, applied for a passport and booked my airfare to London. My friend's fiance Simon met be at Heathrow and we took a train into the where we stopped at his flat in Brixton to pick up Jan and headed to Victoria Station to catch a train to Talaton. After a minor misunderstanding with a ticket salesperson (due to the language barrier...I must have spelled my name to him five times) I was issued a British Rail Pass. 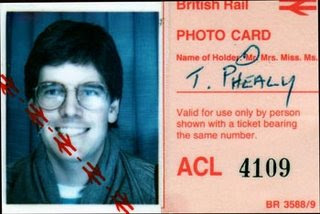 Talaton is located in Devon. The nearest city is Exeter. It is a farming community that dates back to the 1500s. Simon's parents owned a 16th century farmhouse called the Old Manor that they operated as a bed and breakfast.The wedding party and many of the out of town guests were staying there. Simon's father picked us up at the train station and drove us to the Old Manor. 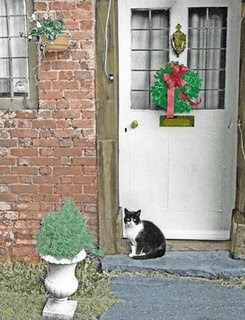 We were met at the front door by Corky the cat, one of the most British looking cats I've ever seen. 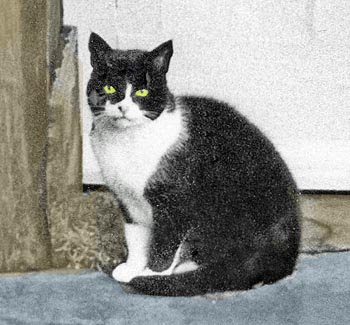 Behind Corky was Simon's mother, an equally British looking and very gracious woman who welcomed us warmly and herded us into the dining room for a quick supper of bangers and eggs. Then I went to my bedroom and collapsed in a jetlagged coma until 1 p.m. the next day.

We went Christmas shopping the next day in Honiton, a small town in Devon known for its lace and antique shops. The only thing I could afford was an old top hat from the 1800s that was a few sizes too small. 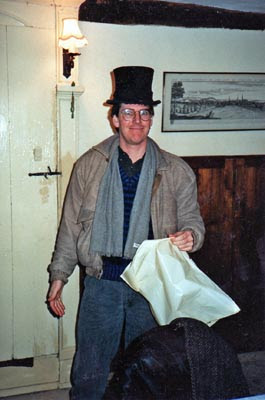 But at tea time that day I experienced my first "cream" tea. When I'd first heard the phrase "cream" team, I thought it implied some flavored tea. What it really referred to was teas served with scones, jam and plenty of Devonshire heavy cream to spread on the scones. Fortunately I was a skinny young man at the time and learned the art of piling on the cream and jam. The result of a cream tea was a sense of euphoric immobility and peace unlike any I've ever achieved since. 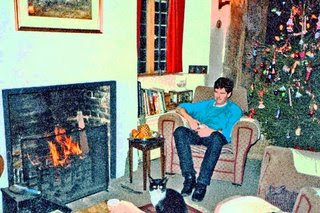 On Christmas Eve, we ended up at the local pub listening to the locals converse in a Devonshire accent that was thicker than their cream. I'm convinced I was perceived as a deaf mute or an idiot because all I could was nod and grin because I didn't understand a word that was being said to me.

We returned to the Old Manor and opened presents and toasted with some Christmas cheer. And although I was far from home and away from my family, I will always remember that Christmas as one of the most peaceful and warm I had experienced as an adult (until I met my wife of course).

Damn, Tim, you were one handsome young man back then.......what happened?

I really enjoyed this post, but what happened to your face photoshopped onto a scone?

It brings water ta the lamps and a smile to the dial eh!


I know THE Micheal repeats him self but his comment is a tad over the top.
Musta pushed the button a few times!
Hehehehehe!

THE Michael,
Ah to be that young and that skinny again. But the Whitesnake is right, it didn't bear repeating 8 times. I'll just delete the extra ones if you don't mind.

Thanks Whitesnake, Some day you are going to have to post an English/Aussie Dictionary to teach us how to speak in colorful Australian. :)

What a wonderful Christmas memory. Nice to see old photos of you as well. That top hat photo is priceless.

By the way, I think you're even better looking now.

I'm a little hung up on the cat. What makes a cat british? Did she have an accent? Mine does you know (on rare ocassions).

Thanks Shandi, That was nice of you to say. I'll consider that a Christmas gift :)

You can't really tell from the photo at that size, but Corky the cat had this great face that was kind of like the Chesire cat from Alice in Wonderland. He managed to maintain that bored, polite look that many of the British seem to do so well.

Corky looks a bit like Winston Churchill, don't you think? That could have something to do with it. Looks like he's nabbed his share of cream too.

The true sign of a good storyteller is how well they take you back. As I read your post I could almost feel the heaviness of your breakfast of scones and tea in my belly and the warmth of the fire on the back of my neck. I closed my eyes and wondered what I was doing at that time - 16 years ago - and a smile came to my face.

It is an honor to live vicariously through your memories.

Kristy, Come to think of it, he did smoke a cigar and mumble something about "...this was their finest hour."

Thanks Miss Bliss, memories light the corners of my mind. But the photographs help, too.

That was a really good trip. Is Jan still married to the British guy?

Lights, Yes, as a matter of fact, Jan and Simon visited Tess and I around Christmas last year. They live in Montana. Jan is a librarian and Simon teaches film theory at the local University. Unfortunately, I belive Corky is dead.

I really enjoyed this post Tim. And great photos as well. Thanks for sharing yet another warm memory. Brightest Blessings.
~gina~

Hope its ok for a new blogger to jump in here? Im following Gina :0)
Just gotta say I loved this post, you brough back memories of clotted cream and homemade jam on warm scones, washed down with plenty of sweet tea, snuggled in a comfy armchair. Devon is a wonderful place, thanks for bringing back my own happy memories

Spooky Blue, I'm always glad to welcome new visitors. Thanks for stopping by and I'm glad the post brought back good memories.

Hi, loved the pictures and the story about The Old Manor. We bought the house twelve years ago - it was very weird to see pictures of our house on your blog!

I do recall the Dixon's sold the place. I hope you are enjoying the Old Manor! It was such a lovely place.