The truth about toys 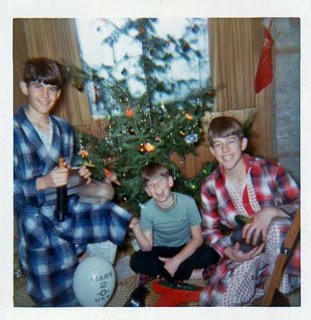 As much as I loved Christmas as a child, it did teach me an important lesson about truth in advertising. There is none. Or at least there wasn't when it came to ads for toys.

I think it was 1968 when I finally saw the light. It was one of those transitional years. My oldest brother Ted was a hunter and asked for duck decoys and a duck call. My other brother Dan asked for a telescope.

I was 10. I was convinced that what I really needed to be happy that Christmas was this Mars lander spaceship that from what I could judge from the television commercials was a fully operational space ship that I could control. It would take off and land based on my piloting skills. I had to have it.

As you can almost see from the photo, we all got what we asked for. Ted got his duck decoys. Dan got his telescope (you can see one leg of it on the right of the photo) and I got my Mars spaceship.

The problem was the spaceship turned out to be a stinking balloon you taped onto a plastic gondola. The remote control turned out to be a cheap fan you controlled with a handle. If you moved it at the right angle, you could make the balloon float around the room.

Even at 10 I knew it sucked and I'd been lied to. It was fun to play with for about five minutes. Even the underwear and socks my mother always managed to slip under the tree as a Christmas present were more interesting in comparison.

Okay, you can slip into your lectures now about commercialism and toys not being the true meaning of Christmas. BS. The reality is that we all want things. And it is the wanting that is sometimes more satisfying than the getting. The bummer is that I fell for the dream and got sideswiped by the reality. It was one of those Sea Monkey moments.

But I learned my lesson. Apparently all of those people who fall for the Nigerian spam scams didn't.

Who said there isn't magic in Christmas?
Posted by Time at 9:49 PM

Oh yeaaaaa, I remember well those comic book advertisements that made the toy look like the most amazing high-tech device a kid could dream of getting, and then being sent a piece of crap that couldn't do what they implied if it tried. "Incredible!", "Lifelike", or "Amazing" were dead give aways that the toy was anything but.

Now, about these bridges you keep trying to sell us.....

Hey, how come you don't have a plaid robe and polka dot pajamas like your brothers?

It was that glorious Sea Monkey expose that you wrote a couple years ago that got me hooked on your blog. So all the disapointment you suffered as a child did not go to waste. Assuming that you consider entertaining strangers on the internet an worthwhile activity.

And I know you do.

THE Michael,
That's funny, "incredible," "lifelike," and "amazing" are the words I use to describe your blog.

Lights, You know, I was wondering that myself when I looked at the photo. I do know that the only time we ever wore robes was on Christmas morning and that was only because we'd get a robe for Christmas.

We created our own presents.
I could create a rein of terror with a ballon on a stick.

As adults we're expected to talk about the spirit of giving. As children, it's the receiving that matters. And I think that's the way it ought to be.

My son always asked for things that I know are a waste of money. Seeing his face on Christmas morning (before the toy falls apart) is still worth it.

For starters - after reading your post I realized I was never disillusioned with regard to a toy not fulfulling its promise. I feel like I lost out. Perhaps having been let down a few times would give me that cynical, yet realistic angle, I am missing.

Instead I grew up thinking most everything I saw was what it said it was. I have been trying to grow up and come to grips with the fact that nothing is as it seems, but your blog always seems to deliver, so I think you're ruining my chance at truly reaching adulthood.

btw - I dig the Christmas Day smile/laugh on your face.

Whitesnake, which is exactly why the Australian airforce is feared throughout the world.

Shandi, It's back to the thrill of anticipation I was talking about. It's a pity that, like the smell of fresh ground coffee, it's never as good when you get it as when you want it.

You snuck in there while I was replying to Whitesnake and Shandi. It is probably for the best that things are always what they seem. If reality really was reality then it would genuinely bite. :)

LOVE that tree! It's a classic and is so clearly NOT a fake one, LOL! A fake one would have more branches....

Hayden, The tree is much more sparse than I remember. It was always full and fragrant in my memories. But I think that was one of the bargain trees we got at K-mart. My father never liked paying more than $3.99 for a tree.

That has got to be one of the best bits of wisdom I've read in a while. It can be applied to more than just Christmas gifts.

Shandi, Thanks. I guess it does apply to many more things than Christmas gifts or coffee.