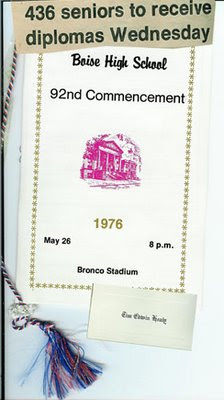 We attended the graduation ceremony for our nephew last night. It was held in the hinterlands of the Puget Sound in the events center of a county fairgrounds. We parked in a dirt overflow lot and made our way through the swells of families milling about before the ceremony.

There was no room remaining on the main floor of the hall when we entered, so we foraged for seats in the bleachers amongst teens and grandmothers fanning themselves with the commencement program. The high school band warmed up in the corner of the room, muffled by the general cacophony of the families waiting for their chance to snapshot the momentous occasion.

I had my digital camera in my hand as well, knowing intuitively that any photo snapped in a room designed to house gun shows and crafts fairs would fail to capture anything other than the heads of the people in front of me. But I knew how important it was for Tess. She'd helped raise this nephew and still saw a toddler posing as a awkward teenager when she looked at him through her maternal aunt eyes.

The band struck up a weak rendition of Pomp and Circumstance and the graduates began filing in with very little pomp and more casual circumstance. Tess clicked her tongue at flip flogs and tennis shoes sticking out below the graduation gowns. "We dressed up for graduation," she whispered in disapproval. I patted her hand. Inside I wondered when we had become the finger wagging, older generation.

I put my camera to my eye, ready to photograph our nephew when the line of blue and white snaked past us below towards their rows of empty seats for what they probably viewed as their last assembly. But we were so far up and the graduates were so uniformly anonymous in their gowns that somehow we missed him.

The ceremony began with a speech by the principal. Then there was a welcome speech by a boy who was obviously one of the school elite. His name was all over the program along with a smattering of other honor students and class presidents.

I felt a twinge as I listened to the speech. How is it that each generation of high school students divides themselves into groups of popular kids, jock, freaks and the invisible? Even alphabetized and robed, these kids were no different.

It struck me, too, how young these graduates were. The valedictorians highlighted the milestones of their young lives in terms of kindergarten, grade school, middle school and the pinnacle: high school. They waxed nostalgically about homecomings, cross country races and final tests as if they were now grown up and stuck in that looking back phase of life instead of perched on the edge of the beginning of it.

The restless graduates nudged each other and stifled giggles as if they were indeed at one more assembly. The speeches wound down and the moment of receiving diplomas began. The rows rose and filed by as the clusters of family and friends cheered. Some of the graduates gave victory gestures and hoots of happiness at freedom. Some were somber and awed by being in one of life's brief "center of attention" moments. Others simply accepted their diplomas and scurried off the stage into the shadows.

When our nephew's name was read, the stage lights burned out suddenly and I lost yet another opportunity to capture the fuzzy moment from my hapless perch in the bleachers. But Tess still glowed with pride as she watched the amorphous shape in the gloom accept his diploma. When he had filed off, someone found the house lights and illuminated the event once more.

We sat through the reading of the rest of the names of young people we didn't know. The heat from all of the bodies clustered in the hall was stifling. As it reached the unbearable stage the graduating class was introduced and they tossed their mortarboards into the air. Once again they formed into their last lines of high school and filed out. Our nephew's line turned the opposite direction from where we sit and my final photo opportunity disappeared. I put the camera back into my bag and we clumped our way down the bleachers towards the fresh air and to rendezvous with our nephew and his family.

Outside Tess' maternal radar honed in on our grinning nephew still in his hat and gown. Tess rushed in and pinned him between herself and his high school girlfriend (also graduating that night). I pulled out the neglected camera and snapped away, hoping every one's eyes were open (literally and figuratively).

I stood back as the strange faces of our nephew's family darted in and out of the circle. I am a relative newcomer in this family and there is no time in all the commotion for many introductions. That is okay. I'm used to being that shadow in the photographs cast by the one taking the photo.

Our nephew peeled off his gown. He was wearing shorts and a t-shirt. He pulled on a sweatshirt and Tess hugged him one last time while he impatiently looked for his escape route to go to his all night senior party.

We drove the long route home talking about the ceremony, our nephew's future and what it had been like when we graduated from high school. Some memory synapses fired in the dim recesses of my brain and I recalled that night 30-some years ago when I'd grasped that diploma folder in my hand and wondered vaguely at what had just happened and where I was going next. 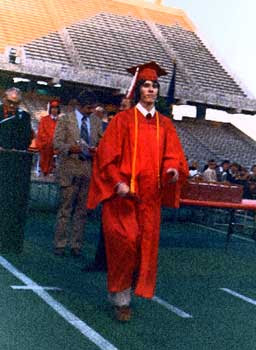 "You know," I said to Tess as she squinted at the headlights and drove back to our own present, "I don't think any of those kids have a clue as to how much of their life is still ahead of them."

We drove the rest of the way home in silence.

I think your memory is typical of most of us: we stand on a threshold filled with what has been, and peering dimly, mutely ahead.

so, tim, of the high school categories mentioned, which were you?

When I think back to those years, I thought I was so grown up. I see photos of the same time and realise I was just a kid with my whole life stretched out before me. If only I realised then what I know now.....youth is wasted on the young. *Gets zimmer frame and staggers off*

Wonderful reflections on one of life's passages. I realize looking back that I had no idea about what was ahead of me ... at that age you really do live in the moment. JP

Of COURSE they have no idea!
if they did, they'd stay stoned.

Nice description, pretty much captured every graduation I've ever attended.

Speaking of long ceremonies I'm going to Florida to watch my brother get married. I'm not worried tho. It's in a catholic church so I'm sure it'll be really quick.

Whitesnake, I respond in silence.

Hayden, I was an honor student and band geek. I just felt invisible.

Angel,
Gets zimmer frame and staggers off...hmmm...I have no response to that.

Thanks JP, I still have no idea...

Lights,
I'll pray for you.

Your description of Tess' nephew's graduation made it memorable. I wish I had read other people's descriptions of graduations before I had graduated so I would have remembered to focus not on what made it the same as others, but what I could do to make it different.

My graduation was bittersweet. My parents decided to relocate to another state for my senior year, so I graduated among a sea of faces I did not know. I had to conjure up some sort of nostalgia for my high school experience based on memories I was never a part of. At the time I recall involving myself in the week long graduation week festivities to prevent any feelings of regret 20 years later, but here it is 20 some odd years later and I can't recall a thing. Figures.

Miss Bliss,
Sometimes ignorance is indeed bliss. I doubt if we would do much if we actually knew how it would turn out in the long run.

This is a nephew on Tess' side of the family?

At that age I knew how much life was potentially ahead and didn't feel like it was worth enduring the whole span.

R. Yes, he is Tess' nephew. And fortunately morbid curiousity has kept you going.