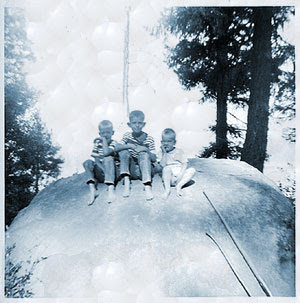 I don’t really like summer the way I did when I was a kid growing up in Boise. I mean, back then you had something to look forward to because you got a break from school. Since I joined the working world when I was 16, there were no more summer breaks. It just meant I had the same routine as usual, but it was hotter out.

Seattle doesn’t even get hot the way Boise did. To this day I equate the pungent smell of sagebrush simmering in the sun with summer. Boise is surrounded by sagebrush desert and brown foothills. I found it oppressive. I longed so many times growing up to live near water.

Now I’m surrounded by water every day and I’ve grown to believe that the perpetual green of this rain sodden part of the country can be almost as oppressive as the heat-impaired brown of Boise. I guess there has to be a happy medium. I did like that Boise had seasons. It literally ran hot and cold. Seattle’s season ooze into one another.

It is hard to get used to place where idiots greet you with, “Hot enough for you?” when it is barely 65 degrees. In my Boise youth, summers were in the 100s. We often spent days indoors with the blinds down, listening to the buzz of a fan and counting down the hours until evening.

I did love summer evenings as a boy. One summer my brothers and I would rendezvous with the neighborhood kids and play flashlight tag almost every night. Or we would put red cellophane over a flashlight lens and hunt for nightcrawlers to feed my father’s fishing habit. Summer nights were alive with crickets chirping and June Bugs crashing up against window screens. I don’t hear crickets in Seattle for some reason.

I miss the crickets.

I used to look forward to Fourth of July almost as much as Christmas. I’d line up my Safe and Sane Fireworks assortment in the order I planned to light them. Occasionally we’d end up with some contraband firecrackers my older brother would score at one of the local Indian reservation booths. I could barely contain myself until it was dark enough to begin our backyard show, the parents sitting in lawn chairs trying to act impressed as we lit cones and tubes with exotic names like Blooming Ground Flower and Dragons Dancing.

I caught myself outside the other night yelling at some neighborhood kids setting off firecrackers nearby. Their response was, “Shut up old man.”

Did I mention I miss the crickets?
Posted by Time at 7:00 AM

Oh Tim, what a melancholy moment. So beautifully written, you've voiced the lament most of us middle agers would like to scream.

Fireflies. That's what I miss most about summer. I grew up in Maryland and we would get lot's of fireflies during the summer. We'd catch them in jar's with holes poked in the lid. The idea was to get enough to read by. I don't recall if I ever got that many.

There are no fireflies where I live now. But at least we have rattlesnakes.

This is exactly how good novels begin.

Not "forsaken" or "forgotten", just silent. Better to hear the crickets don't you think? Too much noise in the adult world. Not a lot of listening going on. I'm still listening Tim.

Thanks Kat, that means alot to me.

Lights, But can you read by a rattlesnake?

Shandi,
I hope my hearing isn't failing, too. Because listening is a virtue. Thanks.

right now, through the open door of my study I can hear two different birds trilling sharply beneath the low, droning sound of an airplane and the steady background roar of traffic. Roar is the wrong word, because of the distance, but I don't know how else to describe it.

oh, and the whine of a motorized scooter.

Hayden,
Spring peepers? Sounds like a San Francisco phenomenon. But I imagine you have your share of summer peepers, too. I'd suggest pulling your shades. :)

no, all of that first list was from my miss-spent youth in Michigan.

here the peepers are silent and don't limit themselves to spring.

I miss the coolness of summer nights, and actually being able to enjoy the outdoors!
I can't do that here in Florida.
Night time is still too damn hot, and we have too many fricken mosquito's!
*sigh*